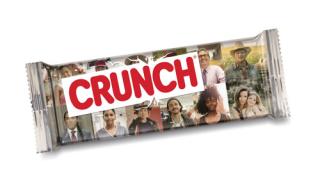 Buc-ee's gave away a $10,000 cash prize to the organization of one first responder during the 2018 First Responder Bowl, which was held Dec. 26.

"As proud sponsors of this year’s First Responder Bowl, we wanted to honor the brave men and women who protect and serve our communities," said Jeff Nadalo, Buc-ee's general counsel and spokesperson. "They are true heroes and we are humbled to support them."

In addition to the contribution from Buc-ee's, a K9 grant will be awarded by K9s4Cops, a non-profit that focuses on placing K9 officers in communities and schools across the country.

During its seventh annual dog tag campaign, Casey's General Stores raised more than $845,000 for Hope For The Warriors, a national non-profit dedicated to restoring a sense of self, family and hope for veterans, service members and military families.

A check presentation took place at the Siloam Springs, Ark., Casey's store, which was the location that collected the most donations.

"Each year, we are so honored to host the dog tag campaign to support the brave men and women who serve our country," said Mike Richardson, vice president of marketing at Casey's General Stores. "Once again, our customers and employees stepped up to help Hope For The Warriors create positive change and provide hope to those military families who need it most."

In seven years of supporting Hope For The Warriors, Casey's General Stores have raised more than $4 million.

CRUNCH, a licensed brand by Ferrara Candy Co., an affiliate of Ferrero Group, is supporting DonorsChoose.org, an American non-profit founded in 2000, to empower public school teachers to request much-needed materials and experiences for their students.

The chocolate candy brand is donating $100,000 to match consumer donations to a multitude of classroom projects that support inclusion, diversity and multiculturalism across the country.

"As the chocolate bar all Americans love, CRUNCH was inspired to give back to some of the most important people in America — public school teachers," said Natalie Hagstrom, general manager of Chocolate, CRUNCH. "The students of American public schools are the future CRUNCH generation and we want them to thrive."

The GATE Foundation, the philanthropic arm of Jacksonville-based GATE Petroleum Co., presented St. Augustine Youth Services (SAYS) with a $120,000 check to support the organization’s work with at-risk boys. This donation was supported by proceeds from the foundation’s 23rd annual Charity Golf Tournament.

"Young men are facing so many challenges in today's world. The caring, stable and therapeutic services that SAYS provides made the organization stand out to us and we wanted to support their valuable work," said Kathy Brady, executive director of the GATE Foundation. "We'd like to thank our generous sponsors and all those who participated in the 2018 Charity Golf Tournament for making this donation possible."

High's convenience stores teamed up with Carroll Fuel hosted an annual food drive to benefit the Maryland Food Bank during the past holiday season to collect almost 4,000 pounds of food to donate to the foodbank in 2019.

The food drive began just before Thanksgiving and continued until the end of 2018. Boxes were placed at each store, as well as the corporate office to collect customer and employee food donations. High’s worked with Fresh Creative Cuisine for pick-up and delivery to the Maryland Food Bank.

Earlier this year, PepsiCo's 4th annual "Rolling Remembrance" fundraising campaign — a 7,000-mile relay that transports an American flag, originally flown on a UH-60M Blackhawk Helicopter in Afghanistan during Operation Enduring Freedom 2012, from coast to coast in the United States — raised more than $250,000 to support Fallen Patriots, which was then matched by the PepsiCo Foundation.

Contributions from partners including 7-Eleven Inc., the Army & Airforce Exchange Service, Foodland and Stater Bros. were made in the form of cash donations, in-kind donations and in-store customer promotions.

Based on the $32,000 funding gap between government assistance programs and the cost of a four-year degree, the contribution will help provide Fallen Patriots scholars over 160 years of debt-free college education.

"PepsiCo is proud to recognize the sacrifices of veterans and their families by helping ensure a bright future for the children left behind," said Jim Farrell, PepsiCo Vice President of Logistics, Distribution and Transportation Jim Farrell, who served five years in the U.S. Army which inspired his involvement as a member of the Fallen Patriots board.

Winners of Rutter's 2018 Vote With Your Dollars Program were Make-A-Wish of Greater Pennsylvania and West Virginia, and the Adams County SPCA. 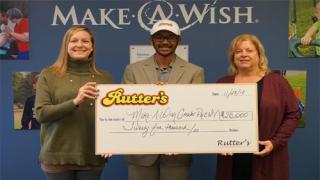 The Vote With Your Dollars program allows Rutter's VIP customers to choose which local charity they will support through their purchases at any Rutter’s location. During the program time period every dollar an individual spends using their VIP account, at the pump or inside the store, counts as a vote for the charity they have selected.

"The program is designed to only fund a single winning project but this year the response by our customers was overwhelming so we responded in kind," stated Scott Hartman, Rutter's CEO. "For 2018 we are funding the projects of the top two winning charities. I look forward to seeing what the 2019 program will bring."

Applications for the 2019 Vote With Your Dollars Program are currently be accepted. To apply, interested charities can complete the online application form with the appropriate documentation. Applications will be accepted through March 1. The Rutter's Charitable Committee will select the participating organizations from the total group of applicants. The organizations selected will have from April 1 through Oct. 31 to collect the most votes to win funding.

Sheetz For the Kidz raised more than $700,821 during its annual December campaign through customer donations, which sets a new record by exceeding last year's campaign fundraising which totaled more than $82,000.

Each year, 100 percent of customer donations are used to directly support Sheetz For the Kidz programs. With a total of $10,455, Sheetz store #503 in North Huntingdon, Pa., was the top fundraiser. A customer and employee appreciation event was held at the store later this month.

"Every year, we have Sheetz customers to thank for their loyalty and generous contributions during the campaign," said Sarah Piper, executive director of Sheetz For the Kidz. "This fundraising initiative allowed us to brighten the holidays for families who needed it most."

Throughout the 2018 holiday season, Sheetz For the Kidz supported approximately 9,500 children, amounting to 16 children from each of Sheetz's 585 stores. Sheetz For the Kidz worked with the Salvation Army to receive wish lists from local families in Pennsylvania, Maryland, Ohio, West Virginia, Virginia and North Carolina. Sheetz employees then volunteered their time to shop, wrap and host holiday parties for the children and their families. Santa greeted the children and presented them with new toys, clothes and basic necessities purchased specifically for them.

During the 2018 holiday season, Stewart’s Shops raised more than $2 million for local children’s organizations, setting a record for the fifth consecutive year. Thanksgiving Day through Christmas Day, Stewart's customers donated more than $1 million to the program, which is approximately $86,000 more than last season.

Each individual donation is matched penny for penny by Stewart's Shops, and there are no administrative costs and 100 percent of the funds benefit local, non-profit children's organizations.

"We are impressed by our customers' generosity season after season. They have joined us in supporting local children's charities for 32 years now, raising more than $28 million," Stewart's Shops President Gary Dake said in a release. "We are proud to give back to our communities that have supported us for so many years and living proof that we are closer to you."

All local children's charities are encouraged to apply for funding from the Holiday Match program through Jan. 31. Organizations can apply online or pick up a paper application at any shop. All groups applying must be locally based, benefit children under 18, and be a qualified, charitable 501c3 organization. All the funds will be allocated in March.

On Dec. 12, volunteers and veterans invited by WAA stopped at the Petro location on I-295 in Bordentown, N.J., where they were welcomed and served dinner at the travel center's Iron Skillet restaurant. The WAA message about the importance of remembering our fallen heroes and honoring those who served were also shared.

"It's our privilege to support the Wreaths Across America organization by opening our doors to provide them with meals and a place to stop, rest and share their message," said Barry Richards, president and chief operating officer of TravelCenters. "The WAA mission to remember and honor those who have died while serving in our military is important and one we share throughout the year in our travel centers."

Dec. 1 marked the 21st anniversary of Weigel's Family Christmas, a special event created to bring more than 200 local children in need and more than 300 caring volunteers together for a special Christmas shopping spree. 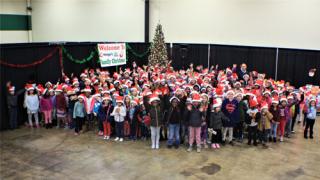 2018 marked the 21st year of teaming with the Salvation Army for the event, which serves underprivileged children from Knoxville, Tenn., and the surrounding areas. Children range in age from five years old to nine years old, and are each given $150 for a Christmas shopping spree at Target.

"This has been a very special and meaningful event since we started it 20 plus years ago," said Kurt Weigel, training and recruiting director. "Our volunteers are often entire families, coming together to give back to our community. We're especially excited to see the growth of this special event, which has required us to seek a new larger facility. We are excited to be at the Knoxville Expo Center this year so we can comfortably accommodate more children this year and for years to come."

Every year, the Salvation Army selects deserving children and Weigel's organizes the event and provides funding. Since the program’s inception in 1998, it has impacted more than 3,800 children.

"We started by bringing six kids shopping, and now we invite more than 200," said Bill Weigel, chairman. "The gracious support of the many volunteers and our vendor partners makes the day possible. This event embodies the true spirit of Christmas."

Prior to shopping, the volunteers prepared a complimentary breakfast for the children, full of treats at the Knoxville Expo Center. Many volunteers stay back to prepare lunch for the children’s return, while other volunteers excitedly wait at Target to meet and help the children manage the money and handpick gifts.