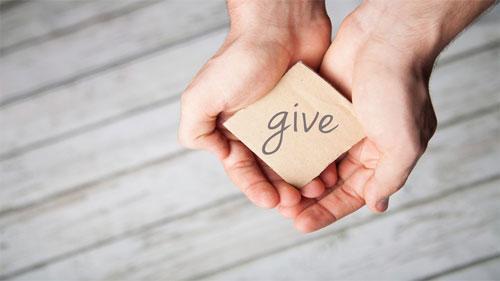 Irving, Texas-based 7-Eleven pledged $7,111 into a college fund for a baby born on July 11, 7-Eleven Day, at 7:11 p.m., weighing 7 pounds, 11 ounces. A representative for 7-Eleven confirmed to CNN that the company has pledged the money for the baby's college fund, as well as onesies, diapers and other gifts.

Throughout the month of September, Casey's General Stores and its guests in 16 states are teaming up to support the Muscular Dystrophy Association (MDA). Throughout the month-long campaign, c-store associates will invite guests to round up their purchase to the nearest whole dollar to support MDA families.

"For more than 10 years, Casey's team members and guests have devoted time to raise vital funds for individuals living with neuromuscular diseases in our communities," said Casey's General Stores President and CEO Darren Rebelez. "We're honored to work together in our communities to help send thousands of children to MDA Summer Camp to learn vital life skills at no cost to families, and to fund research and care for people living with these diseases."

Casey's General Store has raised more than $11 million since 2006 in support of MDA's mission.

Throughout the month of August, 5 cents from iced coffee or Chill Zone beverages purchased across the Northeast will be donated directly to pediatric care programs at partnering children's hospitals. Beverages vary by hospital, including:

"It's incredible to think that this is our eighth annual Cups for Kids fundraiser," said Gwen Forman, senior vice president of marketing at Cumberland Farms. "Supporting the communities we serve has always been something we believe in, and this campaign is a key part of our commitment. Since the beginning of the program we've donated a total of over $800,000 to our hospital partners and we're looking forward to adding to that number this year. We encourage everyone to stop by their local Cumberland Farms this month to participate."

All 124 of Enmarket's c-stores across Georgia and the Carolinas joined the fight against blood cancers in August, marking the seventh consecutive year the stores have helped raise money during the Leukemia and Lymphoma Society's (LLS) Light the Night campaign.

As part of the month-long campaign, Light the Night paper icons were sold for $1 each to support the non-profit’s mission. To date, Enmarket's participation in the organization’s major fundraiser has raised more than $500,000. This year, the c-store retailer hopes to add $150,000 to that amount.

"Our customers and our employees enjoy this fun and easy way to support an important cause," said Brett Giesick, president of Enmarket. "Our mission is to enrich life in the communities we serve, and we do that in a variety of ways, from our Encourage Health speaker series to the LLS campaign. This particular icon sale gives customers a chance to join thousands of other customers to make a major impact with a small donation."

The money that's raised will be donated to LLS at the annual Light the Night program, set for Nov. 9 at Daffin Park in Savannah, Ga.

GPM, through its Roadrunner Markets and Crenco stores, raised $45,255.55 during the St. Jude "Give thanks. Give hope." campaign. This year, the retailers joined more than 100 participating partners nationwide by asking customers to purchase a spring-themed $1 pin-up in support of St. Jude for the entire month of June.

"We are proud to partner with our customers to support the kids of St. Jude Children’s Research Hospital," said Arie Kotler, president and CEO at GPM. "It's true that every dollar makes an impact when supporting such a great cause. Our customers truly showed their generosity in support of this campaign that allows St. Jude to continue the research that leads to lifesaving treatments for children across the country and around the world."

For the past several years, Roadrunner and Crenco stores have raised more than $875,000 for St. Jude.

Richmond, Va.-based GPM, together with its subsidiaries, is the largest privately-owned company in the convenience channel. It operates approximately 1,400 c-stores.

Heineken is teaming up with California-based nonprofit One Tree Planted and Outside Lands Music Festival to make it simple for people to help the environment. In an extension of the brewer's commitment to "Brewing a Better World" by promoting environmental sustainability, the partnership joins the entities in a retail promotion where each $1 donation results in the planting of one tree. The efforts will be focused in Northern California.

The July-August retail promotion features point-of-sale that prompts shoppers to text "Green" to 88500 and receive a bounce back link to the Heineken's unique One Tree Planted campaign page. Consumers will then have the option to donate to the Northern California project, or click to be directed to the Heineken Outside Lands microsite for a chance to win VIP tickets to Outside Lands Music Festival in Golden Gate Park, view the Heineken House lineup and track how many trees have been planted via the Heineken One Tree Planted initiative.

"In the past few years, California has experienced an unprecedented amount of environmental devastation from long droughts, to deadly forest fires and heavy flooding," said Quinn Kilbury, head of partnerships & consumer experience, Heineken USA. "This continuous destruction is taking a toll on California residents, their homes and their forests. With Outside Lands playing such a huge role in the Bay Area’s green movement, Heineken is partnering with the organizations to help regrow California’s forests one tree at a time. Small acts make a big difference and Heineken wants to help."

Kellogg's donated $1 million to No Kid Hungry to expand school breakfast programs. The company's Special Channels business also partnered with No Kid Hungry on the Elevate the Plate Challenge to award school foodservice directors who share fresh ideas that get kids excited about school meal programs.

"A K-12 school foodservice directors' focus is making sure kids are well-nourished and ready to start the school day," said Wendy Davidson, president, Kellogg's Specialty Channels. "Our Elevate the Plate Challenge highlights the great work our foodservice customers are doing to provide delicious food to kids. Through our partnership with No Kid Hungry, foodservice directors can win one of ten $5,000 grants that help expand their offerings within schools."

The Elevate the Plate Challenge kicks off Oct. 1 and concludes Nov. 15. Winning entries will be announced in early 2020.

Kellogg Co.'s support of No Kid Hungry is a key part of its Kellogg's Better Days global signature cause platform.

Kwik Trip raised $81,000 during its 2019 coin canister campaign to support the Partnership for a Healthier America (PHA). Throughout the month of June, all 673 Kwik Trip locations in Wisconsin, Minnesota and Iowa participated in the campaign.

"Kwik Trip is honored to collaborate with the Partnership for a Healthier America and raise money and awareness for PHA's healthier food, fitness and lifestyle initiatives. The monies raised will help make a positive difference in the communities we are fortunate to serve," said David Ring, community relations manager at Kwik Trip.

Kwik Trip is the first convenience store to partner with PHA three times. Now in its sixth year, the campaign has raised more than $417,000.

Through a creative partnership between OnCue and Allied Arts, arts-themed cups were sold at more 75 locations from April through June, raising $10,000 for the non-profit.

The 50 cents donated from each refillable cup purchased will assist Allied Arts' mission to broaden support for the arts by raising financial support for cultural organizations, advocating for arts education and promoting excellence in the arts.

"Our partnership with Allied Arts means so much to us," said Laura Aufleger, president of OnCue. "We truly believe in the work the organization does for Oklahoma, and we hope that these cups help give recognition and offer support for its amazing programs."

PepsiCo's IMAG!NE snack brand is embarking on a three-year partnership with No Kid Hungry, a national campaign to end childhood hunger in America, to provide up to three million meals to kids in need.

"As a snack brand that was created to celebrate the possibilities of a child's imagination, IMAG!NE's mission is to give kids the fuel they need to dream big," said Sarah Guzman, senior marketing director, IMAG!NE. "By partnering with No Kid Hungry, we're extending that commitment by helping children in America get the food they need to grow up healthy and strong."

IMAG!NE also provided $50,000 in grants to summer meal sites across the country to help enable creative play for kids.

Launched nationwide in 2018, IMAG!NE was designed by parents looking for better snack options for their kids. The snack line includes two products — Yogurt Crisps and Cheese Stars — that are made with wholesome, real ingredients like cheese and yogurt, provide a good source of protein or calcium, and are Non-GMO Project verified.

Rutter's teamed up with the Central Penn Food Bank to donate more than $150,000 in food and beverages to feed more than 1,500 families during the first half of the year. The York, Pa.-based retailer provided sandwiches, milk, drinks and more to local families in need from 54 locations.

"Rutter's is committed to improving lives in the communities we serve and the children living in them," stated Scott Hartman, Rutter's President and CEO. "Being able to provide these children with food and beverages, helps provide peace of mind for them and their families, which is our primary goal with this program."

The 28th annual Speedway Miracle Tournament raised more than $2.8 million in donations to Children’s Miracle Network (CMN) Hospitals. The event set another new donation record this year due to the generous support of the c-store retailer's business partners and remains the centerpiece of Speedway’s annual CMN Hospitals fundraising efforts, the company said.

A total of 43 Speedway Miracle Children and their families, representing 40 CMN Hospitals across the country, were in attendance at the event, which also included a celebration dinner with a medals ceremony for the kids.

"Thanks to the generous support from Speedway’s business partners, the Speedway Miracle Tournament continues to be a critical piece of our fundraising efforts, with record setting fundraising amounts each year," said Glenn Plumby, executive vice president and chief operating officer for Speedway. "Just in the last seven years, this tournament has raised almost $15 million to support local children’s hospitals. These funds are used for critical lifesaving equipment and much needed resources at the hospitals to help treat sick and injured kids. The 43 Miracle Children who attended this year’s event are a testimony to the value of our long-term relationship with CMN Hospitals."

Since 1991, Speedway has raised more than $109 million for CMN Hospitals, primarily through year-round fundraising in the stores and other initiatives such as an employee payroll deduction program.

"Pediatric cancer is extremely underfunded, and by collaborating with MD Anderson Children's Cancer Hospital and our customers, we can help make a difference in the lives of pediatric cancer patients through emerging treatments, support camps and educational programs in the hospital" said Brad Williams, Senior Vice-President of 7-Eleven Inc. "We are committed to supporting programs that benefit the children and youth in the communities where we live and work."

Stripes customers can donate by purchasing a $1 Stripes Celebrates Tomorrows paper pin-up while checking out at participating stores. To show appreciation for their donations, Stripes will give participating customers a $1 coupon for select bottled water.

Since 2014, Stripes has raised more than $4.8 million for MD Anderson Children's Cancer Hospital. Funds this year will continue to support week-long summer camps that enable kids to be kids despite their cancer diagnosis. Additionally, funds will be used to support MD Anderson's Pediatric Education and Creative Arts Program and a new research project that will allow for the development of novel cellular and immunotherapy approaches for pediatric cancer including sarcomas and brain tumors.