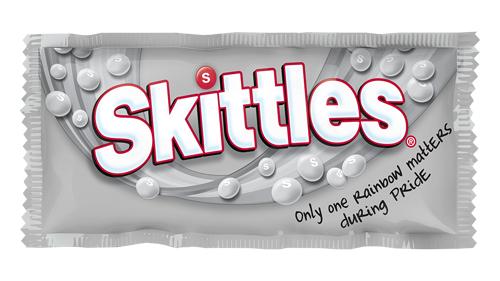 For the second year in a row, Mars Wrigley's Skittles brand gave up its signature rainbow in support of and to celebrate the LGBTQ+ community with limited-edition Skittles Pride Packs featuring all-gray packaging on the outside and all gray candies on the inside.

Skittles is also continuing its partnership with GLAAD, the world's leading LGBTQ+ media advocacy group. During the month of June, $1 per pack purchased was donated to GLAAD (up to $100,000).

"Skittles is passionate about advocating for the LGBTQ+ community, which is why we have chosen to bring back Skittles Pride Packs as a symbol of our cemented efforts and support for the community. Through the return of Skittles Pride packs, we emphasize our commitment to not only being a great place to work, where all associates can feel seen and accepted, but also our commitment to people in our communities by continuing to shape a world that is connected, caring and celebratory," said Sarah Long, chief marketing officer, Mars Wrigley North America. "We are thrilled to continue our partnership with GLAAD to support the important work they do year-round. Skittles giving up their rainbow means so much more than just removing the colors from our Skittles packs, and we're excited to use our platform to do our part in driving visibility for the LGBTQ+ community, creating better moments and more smiles."

Mirabito recognized National Nurse's Day on May 6 by offering a free any-size coffee to all nurses, healthcare professionals, and first responders at participating locations throughout central New York and northeastern Pennsylvania.

"We want to use this day to celebrate and recognize all nurses, healthcare professionals and first responders in our region, especially this year," said Joe Mirabito, chairman and CEO of Mirabito Convenience Stores. "They've continued to show up for their communities as front-line workers throughout this pandemic and we are all grateful for that."

PMI Brands, previously Promotion in Motion Cos. Inc., is sponsoring confectionery industry legend and Candy Hall of Famer Dave Fleischer, who recently commenced a 15,000-mile Journey of Hope — a road trip up, down and across the 48 contiguous United States, in loving memory of his daughter Sarah, who passed away from Cholangiocarcinoma in 2018.

In addition to honoring Sarah's memory, Fleischer's trip aims to raise awareness and raise money for the Cholangiocarcinoma Foundation (CCF), whose mission is to find a cure and improve the quality of life for those affected by Cholangiocarcinoma, cancer of the bile duct.

Fleischer's journey includes stops in at least 15 towns named Hope, where he will meet with current CCF warriors and caregivers, and will include stops to give thanks at hospitals and research facilities working on a cure for Cholangiocarcinoma.

"We are so proud to support Dave as he makes this incredible trek across our country and honors the memory of his daughter Sarah," shared PMI Brands President and CEO Michael G. Rosenberg. "Dave has been a dedicated candy industry leader, a friend, mentor, and spokesman, who has made an indelible mark on so many throughout his career. The journey Dave is embarking on to help raise awareness and funds to arrest Cholangiocarcinoma, is just another instance of Dave selflessly stepping up to assist others and make a difference."

The annual two-day golf event began back in 2003 and has helped Rutter's and Rutter's Children's Charities raise more than $2.6 million to support local children's charities in Pennsylvania, Maryland, and West Virginia over the past 19 years.

Over the past year, funds raised from Rutter's Children's Charities 2020 charity golf outing benefitted a variety of charitable organizations, including:

Pennsylvania-based Sheetz kicked off the "Get a Meal, Give a Meal" campaign, where the convenience operator will donate one meal for every 6-inch sub sold and two meals for every 12-inch sub to local Feeding America member food banks. The campaign took place on Tuesdays and throughout May and June at all of Sheetz's 621 locations.

"Sheetz has always been passionate and committed to giving hope to families and individuals in the communities we call home who are hungry and in dire need of access to food," said Sheetz President and Chief Operating Officer Travis Sheetz. "As a company, we are constantly working to grow our contributions to Feeding America and are always looking for creative ways to provide our customers with opportunities to make a positive impact on those in need across our footprint. This campaign was designed to do just that."

Sheetz is committed to fighting hunger in the communities it resides in. Through its "Made-to-Share" program, the retailer is rescuing food from its stores and donating it to Feeding America member food banks located in its six-state footprint. These donations include ready-to-eat food items such as sandwiches, wraps and salads as well as healthy snacking options such as fruit, vegetables and yogurt.

"Across the nation, families struggling with hunger are turning to food banks for help. We are honored to be able to serve communities during their most difficult times," said Casey Marsh, Feeding America’s chief development officer. "The support from companies like Sheetz help make this work possible — we are truly grateful for their commitment to fighting hunger."

The meals that Sheetz will be donating will equate to a monetary donation to Feeding America.

Stewart's Holiday Match program donated $1,850 to the Friends of the New York State Military Museum and Veterans Research Center, a nonprofit created in 1991 to support and assist with educational programs and new exhibits at the museum. The donation from the convenience retailer will be used for an upcoming speakers' series planned late this year and next year focusing on attracting young people and families to the museum.

"Stewart's is a tremendously supportive organization, donating to non-profit organizations in the Capital Region and beyond," said former state Sen. Roy McDonald, president of the Friends of the New York State Military Museum. "We are grateful to receive this donation."

Since 1986, Stewart's Shops in upstate New York and southwestern Vermont have collected and matched donations in its 337 shops from Thanksgiving until Christmas each year. This past holiday season Stewart's received 1,752 applications requesting nearly $5 million in support while the Holiday Match program had just over $1.88 million to donate.

Consumers could nominate a hero until May 31, who would have a chance to win $10,000. In addition to the $10,000 grand prize, nominees will have a chance to win first, second and third place prizes valued at $7,500; $5,000; and $500, respectively. Because the contest received more than 3,000 inspiring and heartwarming nominations last year, the brand plans to award 300 nominees with the third place, $500 cash prize as a way to further celebrate and thank the heroes for their community service.

"This past year has been challenging for our country, however, these challenges have presented greater opportunities for us to step up and support our local communities," said Chris Hall, CEO of Talking Rain. "We're thrilled with the success of last year's Cheers to Heroes contest, and this year, we’re continuing to stand by our mission of giving back. Everyday heroes may not always receive the recognition they deserve, and our goal is to bring a little bit of joy to these honorable people for their dedication and commitment to their hometowns."

At the end of the nomination period, the Sparkling Ice brand will identify the top three submissions, which will be voted on throughout the month of July on the Sparkling Ice Rewards website. One grand prize winner will be announced on Aug. 13. The finalist's nominators will also receive a $500 incentive.

In honor of this year's Cheers to Heroes campaign, Talking Rain will continue to support our nation's military heroes through the company's sixth annual partnership with The Honor Flight Network, a nonprofit organization that honors America's veterans. Over the course of Talking Rain's partnership with Honor Flight, the company has raised more than $600,000, sponsoring more than 600 veteran trips to Washington, D.C. through past initiatives and donations from vendors, partners and individuals.

"We are thrilled to be hosting our 25th annual tournament this year to enjoy safe, outdoor activities for a great cause," said Kevin Smartt, CEO at TXB. "We were heartbroken that we had to cancel last year’s event due to the hard year we’ve all endured, but we're looking forward to bringing this annual event back in 2021 and we know our sponsors are excited as well."

In celebration of its 90th anniversary, Weigel’s partnered with Tyson Foods to donate a full semi-truckload of meat products to Second Harvest Food Bank of East Tennessee. 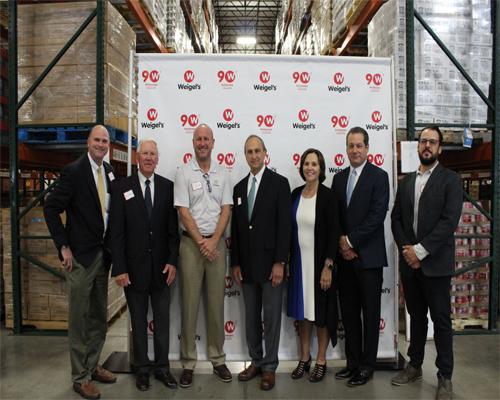 "We feel immensely blessed to have achieved this prominent milestone in our history, said Bill Weigel, chairman of Weigel's. "We are in the food business, and have considerable food suppliers and partners, such as Tyson Foods. Our success has been built on the support of our community, yet many of our neighbors are struggling to put food on their tables. There is no better way to celebrate than to give back to our community, and we are doing so with our partnership and generous donation from Tyson Foods."

Weigel's selected Second Harvest Food Bank to be the distributor of the truck load filled with meat products.

"They have been helping our local communities over many years and know how to get the product out to where it is needed most," said Weigel. "We knew they were the perfect match, and we appreciate their desire to work with us in honoring this special time in our history."