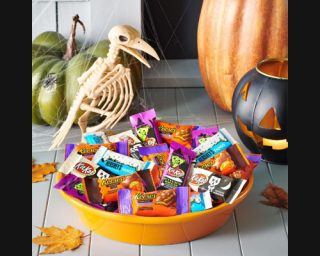 HERSHEY, Pa. — Consumers want to celebrate the tricks and treats of Halloween as early as they want, according to new findings from The Hershey Co.

A recent survey conducted online by The Harris Poll on behalf of The Hershey Co. in early August found that 60 percent of Americans agree that it is socially acceptable to start celebrating Halloween before October.

Among the key findings, 70 percent of parents with children under the age of 18 say it is socially acceptable to start celebrating Halloween before October. Additionally, 75 percent of respondents agree that they start decorating the outside of their homes for Halloween as early as they want to.

"We know spotting that first bag of Halloween candy, whether it's Hershey's, Reese's or Kit Kat, is a seasonal thrill for our fellow Halloween superfans," said Alyssa Smith, senior manager, Halloween at The Hershey Co. "Finding out that a majority of people want to begin their Halloween celebrations before October was not surprising for us, but it ignited a spark for us to get the party started early."

This year, Hershey is delivering on the Halloween excitement early by giving select fans the opportunity to receive a Halloween starter kit, complete with supplies, to celebrate the season. The starter kit will go to the first participants who enter the giveaway and contain some of the fan-favorite Halloween candy from Hershey, as well as décor, crafts and more.

For a chance to win, starting on Sept. 15 at 12 p.m. EST, fans can visit @Hersheys on Instagram and Twitter and respond to the dedicated giveaway posts using the hashtags #HersheyHalloweenKit and #Giveaway.

Hershey invites fans to share how they're kicking off their early celebrations for some inspiration in the comments section.

The consumer sentiment survey was conducted online within the United States by The Harris Poll on behalf of The Hershey Co. between Aug. 4–8. Approximately 2,065 U.S. adults ages 18 and older, of which 1,698 celebrate Halloween, where surveyed.

Based in Pennsylvania, The Hershey Co. has more than 100 brand names in approximately 80 countries worldwide that drive more than $8.9 billion in annual revenues, including such iconic brand names as Hershey's, Reese's, Kit Kat, Jolly Rancher and Ice Breakers, and fast-growing salty snacks, including SkinnyPop, Pirate's Booty and Dot's Pretzels.