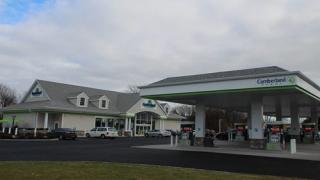 Cumberland Farms moved up the ranks one spot to become the No. 1 convenience and gas station brand.

WESTBOROUGH, Mass. — Cumberland Farms moved up the ranks one spot to become the No. 1 convenience and gas station brand among consumers.

A new study by Market Force Information polled 11,500-plus consumers to rank the gas stations in two categories: traditional gas stations and convenience stores, and grocery stores and big-box retailers with fuel. Costco took the top spot in the second category.

According to Market Force, fuel price continues to be the most important factor for drivers deciding where to fill their tanks, although good lighting is also a strong consideration, as are payment options, fuel quality, and the ease of getting in and out of a location.

The availability of good coffee, fresh food and services such as a car wash rank toward the bottom of the importance list.

Westborough-based Cumberland Farms overtook last year's winner QuikTrip Corp., which dropped to No. 3. Wawa Inc. and Kwik Trip Inc. tied for second. Sheetz Inc. (No. 3) and Phillips 66 (No. 5) rounded out the top five.

Out of the top 10, QuikTrip, Sheetz and Speedway LLC all lost significant ground, each dropping 8 percent over last year, according to the study.

Cumberland Farms customers are also some of the most loyal; it tied with Kwik Trip as a brand where motorists fuel almost exclusively when given a choice.

Market Force also reported that the top three chains on the Composite Loyalty Index in each major U.S. region are:

Phillips 66 ranked highest for fuel quality. QuikTrip led in many of the fueling station and in-store categories, such as location safety, appearance and speed of service, and Kwik Trip was found to have the friendliest cashiers and best merchandise selection.

On the other end of the spectrum, ARCO scored low on all measures except fuel price.

"Even though price tends to drive where people fill up, there are a number of other important areas where gas and convenience store retailers can stand out," said Brad Christian, chief customer officer for Market Force. "For instance, it's fully within their control to ensure each of their sites is well maintained and cleaning supplies are available at the pump. We have found in our modeling work that these and other customer experience attributes can generate as much as a two-fold difference in the number of gallons an individual site can sell."

Looking inside the store, 21 percent of those consumers surveyed said they purchased fresh food at a convenience store during their last visit. Of that number, 35 percent bought a sandwich, followed by a hot dog (20 percent) and pizza (19 percent).

Casey's General Stores Inc. was the most popular for fresh food purchases, although Wawa had the highest fresh food satisfaction scores. This comes as little surprise, given that Wawa ranked No. 1 in the sandwich category of Market Force's recent quick-service restaurant study, according to the company.

Among big-box retailers and grocers with fuel, consumers ranked Costco No. 1 for the second consecutive year with a 71-percent score. Sam's Club and BJ's Wholesale Club tied for second with a score of 61 percent each. Kroger (No. 3), Walmart (No. 4) and Safeway (No. 5) finish out the top five in the category.

Consumers also said Costco has the best fuel quality, appearance and pumping speeds; while motorists find it easiest to get in and out of Sam's Club's and Kroger's fueling areas.

According to Market Force, gas and convenience store mobile app adoption shows no signs of slowing down. Twenty percent of consumers said they've used one, double the 10 percnet who reported doing so in 2016. GasBuddy, which allows motorists to search for gas prices, is still the most popular app.

However, this year, slightly more people reported that they're using apps to locate gas stations rather than just to compare prices. This shift might partly explain why the adoption of retail-branded apps has grown significantly, up 14 percent over 2016.

When it comes to paying for their fuel, most motorists are swiping their cards or inserting them into chip readers, while 10 percent use cash and a negligible 1 percent make mobile payments.

The survey also found 30 percent are worried about security when paying with a method other than cash and, of those, 89 percent are concerned about card skimming devices, followed by the lack of a chip reader.

For the rankings, Market Force asked participants to rate their satisfaction with their most recent fueling experience, and their likelihood to refer the brand to others on scale of one to five. The results were averaged to attain a Composite Loyalty Index score. Only chains that received at least 100 consumer responses and represented at least 2 percent of responses were included in the study.

The survey was conducted online in March across the United States.