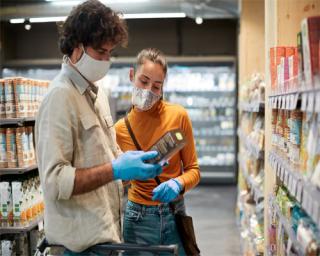 NEW YORK — Despite rising optimism regarding an eventual return to pre-pandemic habits, a large number of American consumers say that even after the COVID-19 pandemic ends, they plan to keep spending less or switch up the products and brands they spend money on — or both, according to a survey released by global consulting firm AlixPartners.

The survey found that 73 percent of U.S. consumers are optimistic about vaccines and about the future, up from 67 percent last winter. At the same time, 36 percent of consumers say their pandemic-hardened buying habits will endure after the pandemic ends. Additionally, 36 percent of those consumers say they plan to keep spending less than they did pre-pandemic and 20 percent say that while they plan to spend the same amount, they will switch product categories and brands.

More than half (51 percent) of Americans who report spending less in the previous three months say have reevaluated what they consider "essential" spending.

The survey also revealed another example of shifting consumer priorities: 62 percent of Americans ages 18-to-34 say they intend to trade down, trade up or shift their spending to other categories and brands. This is significantly above the 40 percent average for Americans of all ages.

"As the changes brought on by the pandemic become clearer, it's becoming easier to see which ones are likely to be enduring," said David Garfield, global leader of the consumer products practice at AlixPartners and leader of the Americas business unit. "One thing I think is permanent is that we are seeing the rise of 'the intentional consumer' — a consumer that in some cases plans to spend less and, in all cases, plans to be much more deliberate about how and where to spend.

"To reach this changed consumer, companies and brands must themselves become more intentional about exactly who they are trying to serve and how to do so profitability," he continued. "Among other things, companies and brands must break down silos and challenge historical models that add needless costs which many consumers will no longer pay for."