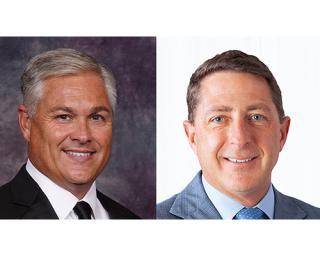 CHICAGO — Two gifted convenience store industry leaders will be inducted into the Convenience Store News Hall of Fame this fall.

This year's retailer inductee is Brian Hannasch, president and CEO of Laval, Quebec-based Alimentation Couche-Tard Inc., the largest independent convenience store operator in the United States in terms of number of company-operated stores.

Hannasch's induction marks the sixth time that a retailer company has seen more than one of its leaders welcomed into the Hall of Fame. Couche-Tard's founder and chairman Alain Bouchard was the retailer inductee in 2007.

This year's supplier inductee is Brent Cotten, vice president of customer and industry affairs at The Hershey Co., the iconic candy and snack brand. Cotten joins Dave Onorato and Tom Joyce as previous Hershey inductees into the Hall of Fame's supplier wing.

The 2022 Hall of Fame gala banquet and induction ceremony will be held this fall.

About This Year's Honorees

Hannasch was appointed president and CEO of Alimentation Couche-Tard (ACT) in September 2014. Under his leadership, the company has grown to be the largest company in Canada in terms of revenue, and one of the largest convenience store groups in the world.

Hannasch has led the tremendous growth of ACT driving strong organic growth while executing and integrating multi-billion-dollar acquisitions, including the acquisitions of The Pantry, Statoil, CST Brands and Holiday Stationstores.

During his tenure, EBITDA has grown by an average of 17 percent per year. ACT also has expanded the super-local focus of its 29 business units and created global functions in commercial optimization, technology, finance, marketing and human resources as it continues its journey to be the world's preferred destination for convenience and fuel.

All global operational and strategic executive leaders report directly to Hannasch, who also led a global rebranding campaign to bring the company's diverse brands together under the Circle K banner. This includes most of its 16,000 stores across the world, except those in Quebec that continue proudly displaying the Couche-Tard logo. In 2019, Hannasch was recognized as the Retailer Executive of the Year by CSNews.

Hannasch holds a Bachelor of Arts degree in finance from Iowa State University, and a Master of Business Administration degree in marketing and finance from the University of Chicago. His focus is on ACT's employees growing together to fulfill the company's mission of "making our customers' lives a little easier every day."

Cotten, as vice president of customer and industry affairs at The Hershey Co., represents the company in U.S. trade associations and at trade events and customer events to establish and build strong working relationships with both North American and global industry leaders.

Cotten began his career with Hershey Foods in February 1992 as a sales representative in the Nashville district. He was promoted to district account supervisor in Knoxville, Tenn., and then Knoxville district manager. He has held several leadership positions within The Hershey Co., including Atlanta convenience district manager, Southeast customer sales executive — convenience, and Southeast area sales manager. He accepted the role of director, national accounts, convenience in June 2006 whereupon he was responsible for the sales of U.S. strategic c-store customers.

In 2019, Cotten was inducted into the National Confectionery Sales Association (NCSA) Hall of Fame. This award is the candy industry's highest accolade. He is now on the NCSA Board of Directors. He was also elected the 2007 Southern Association of Wholesale Distributors' Candy Representative of the Year. And in 2021, he was elected to serve on the board of directors for the Academy of Food Marketing at Saint Joseph's University.