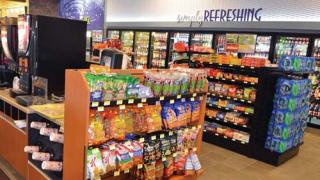 According to the latest NACS Retailer Member Pulse Survey, 59 percent of U.S. c-store owners reported an in-store sales increase, compared to 30 percent who reported a decrease.

Sales figures from the NACS CSX database confirm this post-pandemic sales trend. From April through November 2020, ready-to-eat and ready-to-eat meal options both saw double-digit increases compared to the same period in 2019. December data is not yet finalized, according to the association.

In addition to tweaks in its foodservice offerings, c-store retailers added or extended their offer around more in-demand products. Through its survey, NACS found that 39 percent of retailers focused more on cleaning/toiletry items and 34 percent focused more on grocery items. 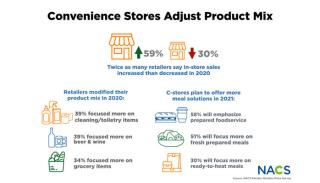 New offers side, the channel did face some challenges. More than two in three respondents said it was difficult to find qualified candidates for jobs, 69 percent say that cleaning items/toiletries were in short supply, and 59 percent say that the coin circulation challenges experienced this summer affected their stores.

"We exist in a small community, where the nearest gas and grocery is over 35 miles away. During the pandemic we were able to stay open and (mostly) stocked, and our community was infinitely appreciative of that," said Damon Goodmanson at Arivaca, Ariz.-based II Sonz LLC.

However, survey respondents are heading into 2021 with some concerns. The survey found that 41 percent of retailers are more pessimistic about shopper foot traffic for the first quarter, compared to 24 percent who are optimistic.

That being said, retailers are increasingly optimistic about sales in each ensuing quarter. By Q4, retailers say they are more optimistic (67 percent) than pessimistic (6 percent) about how business will be performing, likely due to an expectation that larger portion of Americans will have received a COVID-19 vaccination by end of year.

Most of all, retailers expect that the feeling of community and the teamwork in stores to continue to resonate in 2021, NACS added.

"With the shutdown of restaurants and entertainment, people still need to see familiar faces and be able to have some normalcy to their daily lives. Many of our customers continue to come in for that cup of coffee and to be greeted by our employees that they see every day on their way to work. We have received many words of thankfulness for our support of our communities," said Randy Fuller at Jasper, Texas-based Bill L. Dover Co. Inc., which operates 16 Jiffy Markets.

Retailers also recognized the efforts of workers at other stores. In April and May, it was common to see retailers rewarding healthcare workers with special offers in recognition of their important work.

The NACS Retailer Member Pulse Survey was conducted in December by NACS Research. A total of 71 member companies, representing a cumulative 1,717 stores, participated in the survey.