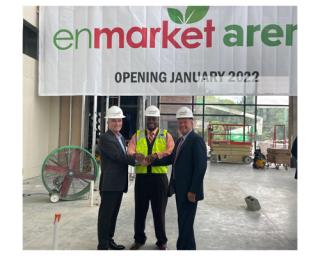 The convenience retailer reached a deal with Global Partnerships, the sales and marketing arm of Oak View Group (OVG) responsible for selling across all OVG Arena Development projects. Oak View Group Facilities will manage and operate the Enmarket Arena.

"As we celebrate the 100th anniversary of Colonial Group, we are thrilled to have subsidiary Enmarket, an outstanding community partner, to be the naming rights partner for our new arena. We appreciate our partnership with the Oak View Group and their dedication in making our world-class arena a reality," said Mayor Van Johnson.

Colonial Group is the parent company of Enmarket.

The Enmarket Arena will host national top touring concerts, family shows, comedians, the new Savannah Professional Hockey Team, other sporting events and private meetings. It will feature 12 luxury suites, five lodge boxes, a party suite and fresh flavors of Savannah. It is slated in to open in January.

"Enmarket's partnership with Oak View Group and the City of Savannah extends a long history supporting Savannah's vibrant music, sports and arts scene," said Brett Giesick, president of Enmarket. "The opening of the Enmarket Arena in 2022 will be an exciting moment for Savannah. It is a venue where Savannahians and people from all over the southeast will enjoy experiences that become lifetime memories. Our participation in this venture embraces our mission to enrich life in our community. We're proud to be a part of such an historic undertaking in our hometown."

OVG, which will manage and operate the Enmarket Arena, is currently involved in several other new arena construction projects, including the Climate Pledge Arena, home to the National Hockey League’s (NHL) newest franchise, the Seattle Kraken; the UBS Arena in Belmont Park, N.Y., the new home of the NHL's New York Islanders; Co-Op Live in Manchester, England; and the Coachella Valley Arena in Coachella Valley, Calif., the home of the newest American Hockey League franchise.

"The Enmarket Arena will be a premier destination for top-quality live entertainment featuring many of the world's top performers, athletes, and attractions," said Peter Luukko, chairman, Oak View Group Facilities. "We are grateful to this new partnership with Enmarket, who will help us extend the reach of the arena throughout the southeast. And every time there is an event here at Enmarket Arena it will reinforce their long-standing support and commitment to the community."