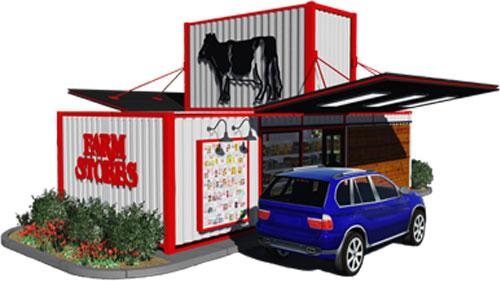 MIAMI — Farm Stores will introduce its latest drive-thru convenience store in Scott, La., next month that will be made from two repurposed shipping containers.

Made from the two repurposed shipping containers melded together and painted to look like a red and white bar, the 640-square-foot store is the first franchised Farm Stores location in the state, CNN reported.

"When I moved to Louisiana, there was a drive-thru everything. To me, a drive-thru store is so convenient, especially when you have kids in the car," commented owner Robert Pressler.

Florida-based Farm Stores opened its first location in Miami in 1957 with a 350-square-foot drive-thru that sold fresh food like milk, butter, bread, eggs and ice cream. Customers would order at the window and an employee would then walk out to their car and deliver the items.

"In the 1950s, Americans were already going to drive-in theatres and drive-in diners. The idea emerged to replicate this model in convenience stores," explained Maurice Bared, Farm Stores owner and CEO, who noted the drive-thru concept was inspired by the pop culture of the time.

Today, the convenience store chain has 65 locations in the Sunshine State and its stores' footprint has nearly doubled over time to maintain its mission to cater to the needs of busy parents by providing dairy goods sourced from local farms, household cleaning products, detergents, pet food, baked goods that are made on-site and freshly squeezed juices.

"This is mom's neighborhood convenience store and we stock it with her in mind. … Speed and freshness is key," Bared said. "From the time a car pulls up and a customer orders bread, it takes less than two minutes to bake it and deliver it to them. Same thing with freshly squeezed orange juices."

Farm Stores was turned into a franchise in 2015, with 28 of the 65 Florida locations franchised. Inspired by his experience in construction, Bared came up with the idea to expand the concept nationwide in a low-cost, environmentally friendly manner by building all new stores in repurposed shipping containers.

"I had this vision of a Farm Store in a container for two reasons. First, the shoebox layout of a container is the same exact size as our stores," he said. "I also grew up in the construction industry with my father having his own business. It's where I saw the foremen had converted shipping containers into their offices."

Over the next seven years, he hopes to have as many as 600 new Farm Stores under development. More than half of those are already underway in New York, New Jersey and Connecticut, according to CNN.

"The majority of new stores are being built in shipping containers, but the local building codes and ordinances won't allow it in some places,” the CEO noted.

Farm Stores outsources the construction to shipping container manufacturers regionally to reduce transportation costs. According to Bared, recycling shipping containers this way is about 40 percent cheaper than building a store from the ground up.

The repurposed store is manufactured using two containers and features tiled floors, sliding glass doors and a canopy over the roof. The inside includes a baking station and employee bathroom.

Once the containers are delivered, the store is welded into place on a concrete foundation.

"The containers are very strong and made to withstand inclement weather, even hurricane force winds," said Bared, adding that the sustainable and eco-friendly building concept is also easy to maintain.

Pressler's Louisiana store will be the first to debut the shipping container model. The owner, who is an area representative for Farm Stores, hopes to open as many as 50 stores over the next few years, CNN reported.