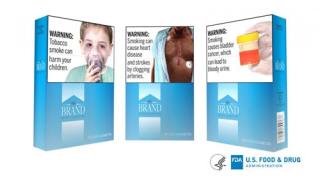 On March 17, the Food and Drug Administration (FDA) issued its final rule requiring health warnings on cigarette packages and in cigarette ads. The graphic warnings feature a combination of text and images depicting some of the health risks of cigarette smoking.

"The 11 finalized cigarette health warnings represent the most significant change to cigarette labels in more than 35 years and will considerably increase public awareness of lesser-known, but serious negative health consequences of cigarette smoking," said Mitch Zeller, director of FDA's Center for Tobacco Products.

The current warnings have not changed since 1984 and research has shown they "have become virtually invisible to both smokers and nonsmokers, in part because of their small size, location and lack of an image," according to Zeller.

"The new cigarette health warnings complement other critical FDA actions, including outreach campaigns targeted to both adults and youth, to educate the public about the dangers associated with using cigarettes, as well as other tobacco products," he added.

The 11 required warnings are:

The FDA unveiled the proposed health warnings in August after years of legal challenge, as Convenience Store News previously reported.

Signed into law in 2009, the Family Smoking Prevention and Tobacco Control Act requires the agency to include new warning labels specifically on cigarette packages and in advertisements. In June 2011, the agency published a final rule requiring color graphics depicting the negative health consequences of smoking to accompany nine textual warning statements specified the legislation.

However, that final rule was challenged in court by several tobacco companies and was ultimately vacated in August 2012 after the U.S. Court of Appeals of the District of Columbia held that the rule violated the First Amendment. In March 2013, the federal government announced its decision not to seek further review of the court's ruling.