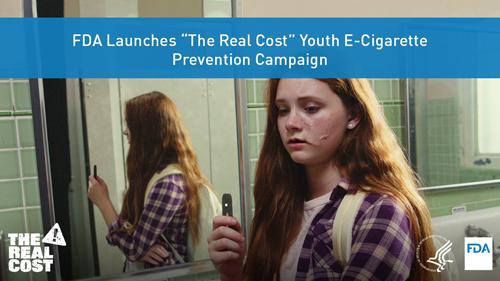 SILVER SPRING, Md. — The Food and Drug Administration (FDA) is bringing its fight against underage electronic cigarette use to the airwaves.

On July 22, the agency launched its first e-cigarette prevention TV ads to educate youth about the dangers of e-cigarette and vapor use.

The FDA also plans to provide new posters for high schools and educational materials for middle schools across the United States as part of "The Real Cost" Youth E-Cigarette Prevention Campaign.

The public education effort was first launched in September with advertising on digital and social media sites, as well as posters with e-cigarette prevention messages displayed in high schools across the nation, targeting nearly 10.7 million youth, aged 12-17.

As the campaign's one-year anniversary approaches, the new TV ads and school resources are designed to continue to engage youth with important public health messages about the risks of e-cigarette use, according to the agency.

"The troubling epidemic of youth vaping threatens to erase the years of progress we've made combating tobacco use among kids, and it's imperative that our work to tackle this immensely concerning trend continue to include efforts to educate our nation's youth about the dangers of these products," said Acting FDA Commissioner Ned Sharpless.

"The new ads as part of our youth prevention campaign highlight one of the many alarming aspects of youth e-cigarette use — that, according to emerging science, teens who vape are more likely to start smoking cigarettes, putting them at risk of a lifetime of addiction to smoking and related disease," he added. "As our new ads state: 'it's not magic, it's statistics,' and the potential for kids to become traditional cigarette smokers because of e-cigarettes gives me great pause."

The new TV ads called "Magic" feature Julius Dein, a popular street magician, who has appeared in online videos with a number of celebrities. In the ads, the social media personality magically turns a teen's e-cigarette or vape into a cigarette in front of their eyes. This illusion illustrates that teens who vape are more likely to start smoking cigarettes.

In August, the agency will distribute new posters with e-cigarette prevention messages that will be displayed in high school bathrooms. The agency joined forces with Scholastic, the global children's publishing, education and media company, to distribute the posters to all public and private high schools in the U.S. The new posters supplement those distributed to high schools nationwide over the last year and deliver new messages catered to teens such as:

In addition to the currently available materials for high schools, the FDA, in conjunction with Scholastic, is also planning to develop and distribute new lesson plans and resources for middle school teachers, students and parents that are expected to be made available throughout the 2019-2020 school year.