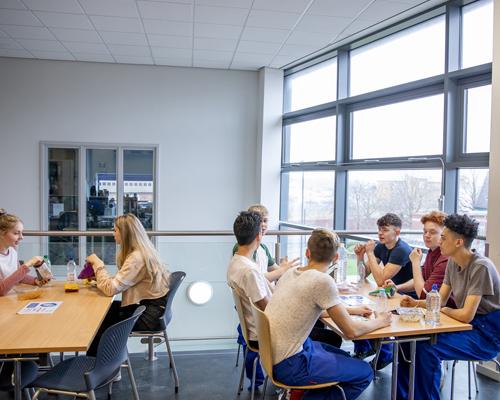 According to Y-Pulse, five food trends — ranging from ethical dining to multicultural menus — are popular among young consumers. The findings come from examining the dining expectations, attitudes, and tendencies of more than 1,000 consumers between 18 and 34 years through multiple comprehensive consumer studies.

"We found young consumers are using a sophisticated set of criteria involving health, nutrition, ethical concerns, and culinary adventure when making dining out decisions," said Sharon Olson, executive director of Y-Pulse. "These trends are most likely to have a great impact on college campus dining in the coming years, if not months."

The five culinary trends that will have a big impact on college foodservice operations according to Y-Pulse are:

Young consumers are very interested in the functional aspect of foods that not only satisfy their hunger but also pack a nutritional punch. According to Y-Pulse, 73 percent of overall consumers surveyed said they enjoyed eating superfoods that serve specific functional purposes.

Superfoods, such as dried fruits, nuts, and seeds, can easily be integrated into food and beverage concepts. These functional ingredients are also great flavor and textural add-ins to shelf-stable snacks in grab-and-go menus.

Young consumers are no longer interested in highly regimented diets. Instead, the research found, they would like to limit certain ingredients in dishes rather than cut them out completely.

It's likely that college campus dining will need to use customization formats to introduce menu items that appeal to those with dietary restrictions, as well as the broader consumer that believes in quality ingredients but not restrictive diets, Y-Pulse said.

In addition, 70 percent of young consumers said they care about ordering protein that is sustainably raised or caught.

With 63 percent of consumers stating that they consider themselves an advocate for responsibly produced foods, menu ingredient communication is the perfect starting point for campus foodservice operations to open a dialogue about their ethical practices and efforts, according to Y-Pulse.

Young consumers want to eat healthy but do not believe in compromising on taste. Specifically, 86 percent said they expect healthy food to taste delicious too. They also want healthy eating to be easy, convenient and work around their on-the-go lifestyle. Eighty-one percent said they shouldn't have to try too hard to eat healthy and three-quarters of them said that they are likely to buy raw fruits and vegetables to eat on-the-go.

With 66 percent of consumers saying they don't mind paying extra for a snack if it's a healthy option, the momentum for healthy but delicious grab-and-go foods seems unstoppable, the research firm noted.

5. The Quest for World Flavors

The culinary trend of seeking international flavors is linked to young consumers' interest in discovering vibrant spices and bold flavors. Besides wanting to sample authentic foods that link them to travel, young consumers are also interested in discovering new ways to eat healthy and sustainable foods.

Another great pull towards seeking new world flavors is to explore regional cuisine linked to their own ancestry or new immigrant populations. Authenticity is crucial with 79 percent of consumers agreeing that a restaurant's ethnic food should be authentic.

From Latin American ingredients to Middle Eastern spices, colleges and universities have a unique opportunity in teaching students about world dynamics by means of food exploration, Y-Pulse added.

Y-Pulse is a research and consulting practice that specializes in helping companies in the food business better understand tomorrow's tastemakers today. Founded in 2004, Y-Pulse is a division of Olson Communications Inc. headquartered in Chicago.