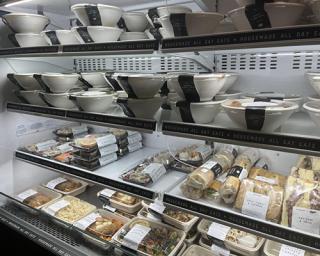 CHICAGO — Foxtrot Market uses a hybrid e-commerce and physical store with potential for a greater foodservice business. When recently hired President and Chief Financial Officer Liz Williams worked a shift at one location, she noted just how much the upscale convenience store chain fulfills customers' food and beverage wants and needs.

"We have a lot of data on who our customers are, but this was an affirmation of how diverse our customer base really is and how we play throughout the day. I got to see everyone come in, from morning coffee and breakfast tacos to prepared salads for lunch to a smoothie in the middle of the day and, later, drinks to take down to the lake," Williams told Progressive Grocer, a sister publication of Convenience Store News. "It also showed the mix of retail, restaurant and technology — a lot of orders came in for delivery through the app and mobile."

Despite the slowdown or shutdown of multiple ultra-fast delivery services in recent months, Foxtrot's ambitious expansion path includes the planned opening of 50 stores within the next two years. They are expected to open in the retailer's hometown of Chicago as well as newer markets in the Washington, D.C., area and parts of Texas and Massachusetts.

"Mike and Taylor have this amazing vision and built a terrific brand. We now need to scale and go to the next level of operational excellence to put consistent operations in place," she said. "I have a lot of that experience, certainly from prior roles where I have scaled brands, and I have worked in retail and restaurant businesses to operationalize and put standards, systems and processes in place.

"I'm excited to bring that together with the development muscle at Foxtrot and working with the team to target which markets we want to go to and thinking about how we do that," she continued. "We are putting a lot of the groundwork in place so we operate the same in Austin and Chicago."

According to Williams, the Foxtrot model works well in neighborhoods with high foot traffic as well as densely operated urban areas.

FRESH & MADE FROM SCRATCH

Williams and her team will also emphasize the expansion of Foxtrot's prepared foods program. Despite the company's start as an e-commerce business, the addition of more physical stores and foodservice offerings reflects a consumer need in an era shaped by the COVID-19 pandemic and, more recently, inflation.

"We have a model that our stores are supported by commissaries that make a lot of our food from scratch. It's a fabulous way to deliver freshly prepared foods at an affordable price and that are really craveable and delicious," she said.

Based on the success of current items and the opportunity to provide more meal solutions, Foxtrot is rolling out a new dinner menu within the next month. The company is targeting the dinner occasion with offerings such as grilled chicken breast, roasted salmon, and whitefish dip, which Williams noted hold appeal even as consumers are wary of escalating inflation.

"I think we are at a really nice price point on prepared foods. We are cheaper than some of the casual dining (restaurants) and are offering something that is more freshly prepared than quick service."

Foxtrot stores offer a dedicated in-store pickup area for digital orders as well as an in-store café. A grocery section features everyday basics in addition to several items from niche and startup brands, along with Foxtrot's own store brand.

Chicago-based Foxtrot currently operates 21 retail locations in Chicago, Dallas, and Washington, D.C. The retailer offers 30-minute delivery through the Foxtrot app and five-minute pickup in addition to a collection of curated goods and gift boxes available nationwide via its national shipping site.