NATIONAL REPORT — The national average for a gallon of gas took a dip despite a rise in demand, which was likely the result of robust July 4th holiday travel.

Pump prices fell another 12 cents since last week to $4.67. The new national average is 32 cents less than one month ago and $1.53 more than a year ago, AAA reported. 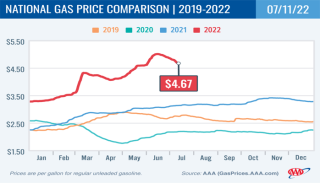 At the close of the formal trading session on July 8, West Texas Intermediate increased by $2.06 to $104.79. Although the price of crude oil rose at the end of the week due to increased market optimism as markets rebounded, the price was still down nearly $4 per barrel from the previous week.

For this week, crude prices could continue to face strong headwinds if the market remains concerned that a potential recession will reduce demand for crude. If demand declines, crude prices will likely follow suit, according to AAA.

It was just one month ago when the national gas price average hit a new all-time high of $5.01 — the highest recorded national average price of gas since AAA began collecting pricing data in 2000, according to the association.