On the week, the national gas price average is 6 cents more expensive. However, it is still cheaper on the month by 3 cents and on the year by $1.02.

Regardless of the national increase, 40 states still have averages of $2 or less per gallon.

"Pump prices are fluctuating throughout the country as demand increases and gasoline stocks decrease," said Jeanette Casselano, AAA spokesperson. "The boost in demand continues to push pump prices up around the country, as more states re-open businesses. Motorists in the Great Lakes, Central, South and Southeast states are seeing the most volatility at the pump." 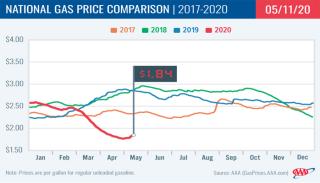 Here's how the country is faring by region:

The Great Lakes and Central States region is seeing the highest volatility in the country at the pump with eight states in the region topping the list for the largest weekly change. All eight states have double digit increases: Michigan, Ohio, Indiana, Illinois, Wisconsin, Kentucky, Iowa and Minnesota.

This region routinely sees pump price fluctuation, so it is no surprise to see significant increases within the Great Lakes and Central states as many states begin to re-open, according to AAA.

In addition to being home to the largest weekly increases, this is also the only region in the country with state gas price averages more expensive compared to last month. Five state averages are currently 10 cents or more than April 2020, including: Wisconsin ($1.69), Michigan ($1.84), Ohio ($1.85), Indiana ($1.86) and Illinois ($2.11). Illinois is the only state in the region with an average above $1.99.

Pump prices are starting to increase slowly in the South and Southeast region. On the week, the largest increases were seen in Oklahoma (10 cents), Arkansas (9 cents), Georgia (3 cents) and Tennessee (2 cents). All other states either saw averages increase or decrease by 1 cent, but the region continues to tout averages $1.76 or cheaper.

The Mid-Atlantic and Northeast region is seeing the least volatility at the pump. On the week, gas prices increased or decreased no more than 2 cents with the exception of West Virginia (up 6 cents), Maine (up 6 cents) and North Carolina (up 3 cents).

All state gas price averages in the region are as much as 15 cents cheaper on the month and over $1 less on the year. At the start of this week, averages range from $2.18 in Washington, D.C., to $1.67 in North Carolina.

Most state averages continue to decrease across the Rockies region. Wyoming and Utah saw the largest weekly declines in the region at 2 cents, while the averages for Montana and Colorado decreased by 1 cent. Averages in the region range from $1.96 in Utah to $1.70 in Colorado.

All state gas price averages in the region are as much as 15 cents cheaper on the month and more than $1 dollar less on the year. Utah and Idaho both land on the top 10 list for biggest monthly changes in the country.

Although state averages have mostly held steady or increased minimally, pump prices in the West Coast region are still the most expensive in the country. When compared to a week ago, only three states saw their averages increase: Alaska (2 cents), California (2 cents) and Washington (1 cent), while Arizona saw the only decline by 2 cents.