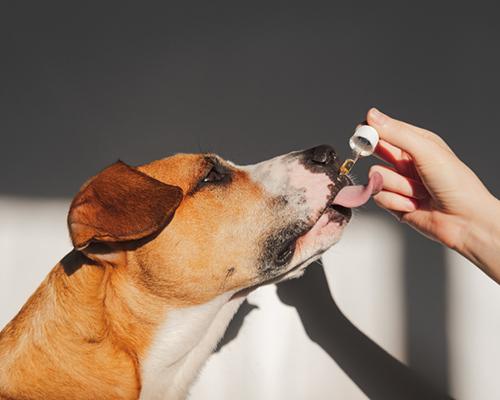 NATIONAL REPORT — CBD customers are buying for more than just themselves.

A new survey of 1,448 pet owners found that 50 percent reported using CBD for their cat or dog, frequently based on veterinarian recommendation.

Treatment of inflammation, pain, seizures, allergies and anxiety are among the top reasons pet owners choose CBD for their animal companions, according to the Leafreport survey.

"Dogs actually have a higher concentration of CB1 cannabinoid receptors in their brains than humans," said Steve Sakala, co-founder of Mana Artisan Botanics. "This makes dogs more receptive to the benefits of CBD."

CBD oil is a favorite delivery format among pet owners, as it is easy to add to their food. CBD pet treats, such as CBD-infused bones, are also popular, according to the report.

"In general, older pets — just like older humans — seem to have a bit more of a noticeable outcome from using CBD," Sakala said. "The higher energy levels in older pets when administering CBD is quite pronounced."

Other key findings of the survey include:

The survey also found that 24 percent of CBD-using pet owners give their pet CBD on a regular basis, while 14 percent gave it to their pet for specific healing purposes. They favor lower doses, with 44 percent reporting having given 0 to 5 milligrams of CBD in one dose. They were evenly split on whether they bought CBD for their pets online or in physical stores (both 38 percent).

"For many of us, our pets are beloved members of our family, worthy of the highest level of devoted care and attention," said Lital Shafir, head of product at Leafreport. "Although the research on the use of CBD in pets is still relatively low, many pet owners appear to be convinced of its efficacy. This is interesting because our previous research has shown that many vets support the use of CBD for inflammation, pain, seizures, allergies, and anxiety in pet populations too, emphasizing its low side-effect profile. Our aim with regular reports such as this is to help consumers become more savvy about CBD and its potential benefits."