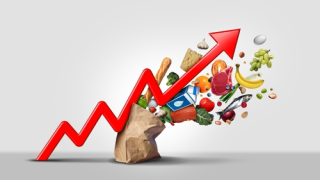 NATIONAL REPORT — Every region of the United States is feeling the impact of inflation, as reflected in rising food costs. Some metro areas, however, are getting hit harder than others.

Food costs rose 10.4 percent in June from one year ago — the largest increase since 1981, Bloomberg reported.

According to the latest Consumer Price Index report from the U.S. Department of Labor, consumer prices overall jumped 9.1 percent last month from a year earlier. Much of the rise came from gasoline prices, which increased 11.2 percent for the month and just shy of 60 percent year over year. The "Food at Home" category increased 12.2 percent from the same time last year.

The impact is being felt in the grocery aisles. The latest data from Datasembly's Grocery Price Index found that across the U.S., baking goods rose 7.6 percent, snacks such as cookies and chips increased 7.5 percent, and dairy and eggs were up 6.9 percent.

In some parts of the country, grocery prices are even higher:

The convenience retailing industry is feeling the impact of rising costs nationwide and that impact is being reflected in price increases. In part one of "Real Talk, Real Issues," a series from Convenience Store News that examines how c-stores are coping with the unique challenges they face, convenience store executives weighed in on the issue.

Scott E. Hartman, president and CEO of York, Pa.-based Rutter's Holdings Inc., acknowledges that the company is increasing prices as inflation raises the cost of store operations not only on products, but also on everything from labor costs to credit card fees.

"If we did not raise prices, it would be difficult to run a profitable store, so the goal is to raise prices enough to allow our gross margin dollars to cover the cost increases," Hartman explained. "Most product categories have seen significant price increases; some 10 percent plus at one time, while others have seen multiple smaller increases."

Plaid Pantry also has been passing price increases along to consumers, due in part to the fact that manufacturers are offering fewer promotions right now as they struggle with supply chain issues in addition to inflation, according to Jonathan Polonsky, president and CEO of the Portland, Ore.-based c-store chain.

On the other hand, one interesting and positive development from the price increase is consumers aren't substantially pulling back on making purchases.

"Based on what I've seen, [stores] have been pretty much able to make price adjustments to maintain their margins," said David Nelson, a professor of economics at Western Washington University and founder and president of Study Groups, a company that conducts study groups for c-store retailers and petroleum marketers. "No one is balking at paying 10 cents more for an item. They just want the item."