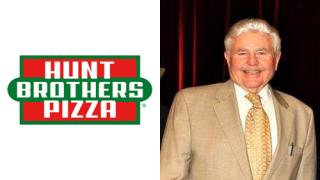 NASHVILLE, Tenn. — Lonnie Hunt, co-founder of Hunt Brothers Pizza, passed away peacefully in his sleep on July 6. He was 85.

Born on Nov. 21, 1936 in Evansville, Ind., Hunt was the second of Austin and Matilda Hunt's seven children. He and his brothers grew up working in the family business and learning the ropes at his father's restaurant, Austin's Drive In. He took over the management of the restaurant at age 17, while just a junior in high school, following his father's death. At the time, he had 40 full-time employees and five siblings still at home.

Lonnie's brother Don launched Pepe's Pizza in 1962, and the Hunt brothers spent the next two decades building the business across the Southeast.

In 1991, Lonnie and his brothers co-founded what is now Hunt Brothers Pizza, each of them bringing their own strengths to the company. Lonnie's drive, determination and innovation were critical to the now 30-plus years of success of the thriving family business, according to current company leaders.

"We remember Lonnie as living a well-lived life. He loved his family, his wife Darla; sons Victor, Chris and Austin; eight grandchildren and 12 great-grandchildren, very deeply," said Scott Hunt, CEO of Hunt Brothers Pizza and nephew of Lonnie. "He was a man of great faith and his beliefs gave both him and his family peace in his final days."

Hunt Brothers Pizza leadership praised him for serving as an inspirational force, both personally and professionally, and always striving to embody the core guiding principles the company was founded upon: being a blessing to people.

In 2021, Hunt Brothers Pizza celebrated its 30th anniversary, as Convenience Store News reported. Lonnie and his brothers specifically designed the company for c-store operators. While it took trial and error to perfect the formula, the brothers put significant effort into understanding how the convenience industry worked, its rules for success, and the difference made by stores' long hours of service.

Their guiding philosophy of helping others led them to focus on rural markets, which frequently operated in areas later called food deserts. Three decades later, rural c-stores still make up the bulk of Hunt Brothers' retail partnerships. The company avoids oversaturating the market with its brand; c-stores that offer Hunt Brothers Pizza have protected territory, helping them to stand out from their competitors.

The second generation of the Hunt family to be involved with the business includes CEO Scott Hunt; executives Britt, Erin, Adam and Frank Hunt; and Chief Operating Officer Bryan Meng.

Over the years, much has stayed the same, especially on the actual pizza preparation side of the business, as Hunt Brothers Pizza has fought hard to maintain the same flavor profile and quality of ingredients, instead of stretching profits by using items of lesser quality. The company also focuses on simplicity as one of its core strengths as it strives to innovate with new recipes, while keeping to that guideline

With more than 8,000 locations across the country, Nashville-based Hunt Brothers Pizza is the nation's largest brand of made-to-order pizza in the convenience store industry.