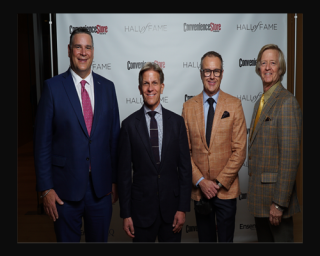 Greg Parker, founder and CEO of Parker's and the 2020 Retailer Hall of Fame inductee, presented Krause with his award and recalled how the two sat together back in 2006 when Krause's father, William "Bill" Krause, was inducted.

"Success is built in many different ways, and my way is very different than your way, and I am not sure which is harder," Parker said. "For me, my success was built on insecurity, if I am going to be honest with myself, and fear of failure. I was able to persevere and do things that made us a very successful company in this industry that I admire.

"You had something that I think was even more of a struggle. You had to live up to what your father had achieved," he told Krause. "I think what you did might be even more important because you had to instill this vision in your team; you had to create followers who were willing to follow you, and to evolve the company your father started."

Parker also acknowledged the younger Krause's philanthropic endeavors, lauding him for creating a legacy for both his family and his local community.

"Fifteen years ago, my dad was selected into this Hall of Fame, and rightfully so. It is nice to be able to fill those shoes and carry that on," Krause said in his induction speech.

Noting that he is fortunate to be part of a family business, he shared that his grandfather opened a fruit and vegetable store in Iowa 100 years ago and today, the family is still "lucky enough" to be selling healthy food to Iowans.

"It's a real pleasure to be able to work with family, and to be able to do that as part of a family business is enjoyable to me," Krause said, pointing out that he had the opportunity at the start of this year to transition to being only the CEO of Krause Group because his son, Tanner, was "more than ready" to take over as CEO of Kum & Go.

"As a family business, we are lucky that, in some ways, we can do what we want to do. I am really proud of what our businesses do around corporate responsibility, around diversity, equity and inclusion, and we try to be philanthropic," Krause said. "As a family, we have been blessed and part of that is how we give back for those blessings."

"As a friend of Vito's for many years, I have had a front-row seat and watched him and been able to appreciate everything Vito does for the industry, has done, and will continue to do well into the future," Onorato said. "Simply put, he's an outstanding individual and he puts everybody in front of him — his teammates, his customers, his friends and his family."

Accepting his award, Maurici expressed appreciation for those around him, crediting their support for helping him earn the Hall of Fame honor.

"As I thought about my career in preparation for this event, I feel so blessed and grateful to be a part of this industry for so many years. As I reflect on what makes this industry so special, one thing comes to mind and that's people," he said. "The people in this industry are truly special. Whether it is an associate in the store working the first shift, or a warehouse [worker] selecting groceries and loading trucks, or a driver delivering products to the store, or an independent c-store owner, the common thread is great people make this industry what it is."

Recognized for exemplifying leadership, business acumen, dedication to the convenience store industry and commitment to community service, Smartt was presented the Retailer Executive of the Year award by Ramona Gideroff, vice president, convenience and military at Anheuser-Busch InBev, who highlighted his role as the 2020-2021 NACS chairman, as well as his work to double the size of his chain, which is being rebranded to Texas Born (TXB).

According to Smartt, who took ownership of Kwik Chek 20 years ago, the c-store industry has a unique way of connecting, and he feels blessed to be a part of it.

​​​"If I said this last year was unconventional and challenging, it would be a complete understatement. We had a pandemic; we had a hurricane, ice storms, and wildfires," he said. "If you think about the year we have had, this industry has represented — over-represented. Frankly, we did a tremendous job as an industry," he expressed.

Noting that he is a big advocate of networking and sharing ideas, Smartt attributed his success to a study group he formed with other c-store retailers in 2001, which meets three times a year.

"I challenge everybody to share and challenge each other," he said. "That is how we get better as an industry."

Another retailer working to make the industry better is Strasburger, who was recognized with the first-ever CSNews Special Service Award for meritorious service to the convenience channel.

CSNews Editorial Director Don Longo explained that Strasburger, a fourth-generation retailer, not only shepherded his own company through the pandemic, but also helped scores of other small and midsized operators in the industry overcome the challenges.

Citing NACS numbers, Strasburger noted that more than 90,000 c-stores in the United States are single-store operators. For many, this industry is the American dream.

"For someone who is coming to this country, for someone who is trying to develop a business, for someone who wants a build a better life for themselves, a convenience store is the perfect opportunity," he said, adding that his work developing "Resources for Retailers" during the pandemic helped him recognize that every one of those 90,000 stores supports a family or more.

"They are trying to make their way in the world just like everyone else," he said. "So, how do we help the small retailers? We have a responsibility as an industry to help these people who are trying to develop their businesses, support their families, and serve their customers the same way we are trying to do through our businesses."

The convenience store industry is not a zero-sum game, according to Strasburger.

"Helping someone out doesn't take away from yourself," he said. "I truly believe a rising tide lifts all boats. I think we have a responsibility as an industry to help everyone who crosses our threshold. We are stronger together if we help everyone."