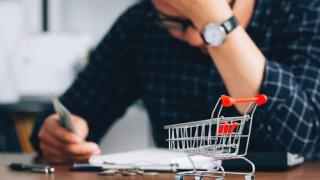 NEW YORK — The United States may not be in an official recession now, and the national average gas price has fallen below $4 a gallon, but consumers are still feeling the pressures of inflation overall.

A recent consumer sentiment survey commissioned by NCSolutions (NCS) found that nearly half of Americans feel like they cannot afford their previous lifestyle. Additionally, three-quarters of U.S. consumers say their family has changed how they buy food with prices on the rise.

"For the second time in a little over two years, consumers are pivoting to new purchasing behaviors at the grocery store," said Alan Miles, CEO of NCSolutions. "Since the start of the pandemic, they've been swapping their favorite brands for what's available. Today, though, value is the centerpiece more often than availability; consumers are selecting brands and products to stretch their budgets as far as possible. CPG brands that meet customers where they are both in this inflationary moment and as prices ease have the best shot at keeping them for the long-term."

Speaking of consumer packaged goods (CPG), six in 10 Americans believe CPG product packaging has gotten smaller but costs the same compared to one year ago. Consumers are also still feeling the strain of supply chain issues, with 69 percent saying there are fewer items of the same product on shelves currently.

Thirty-six percent of Americans also say there is less variety of brands available on the shelf today compared to one year ago.

Other notable findings from the survey include:

"Though it may be tempting to pull back on advertising, a more effective strategy is to recognize and respond to consumer 'stress-flation.' Brands have an opportunity now to build loyalty and attract new customers with empathetic marketing," said Leslie Wood, chief research officer at NCS.