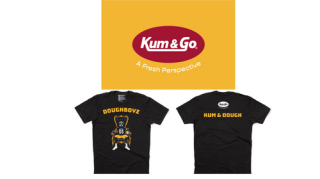 DES MOINES, Iowa — Kum & Go LC partnered with the University of Iowa Hawkeye football team's secondary defense who "get to the money" to launch an exclusive T-shirt line for fans.

The exclusive tees arrived in time for 2022-2023 college football season. Shirts retail for $25 and all proceeds will go directly to Doughboyz, according to the retailer.

"Every season, we watch people overlook the Hawkeyes for the traditional powerhouses and not give the black and gold the respect they deserve. We see people make the same mistake when they settle for traditional convenience store pizza, often just because it's what they grew up with, when there's a better option available at Kum & Go," said Matt Riezman, director of brand marketing at Kum & Go.

In addition to the shirts, Kum & Go is offering $1 off whole pizzas for each interception the Thursday following every game this season in their Iowa stores.

The Doughboyz will also be delivering Kum & Go pizzas to the Neighborhood Centers of Johnson County (NCJC) throughout the season. As part of Kum & Go's commitment to communities, the company is also supplementing the pizza donations with a monetary donation to NCJC.

"We are excited to be partnering with Kum & Go to launch the official Doughboyz T-shirts. We enjoyed collaborating on the designs and think the fans will love them," said Kaevon Merriweather, senior defensive back for the Hawkeyes.

Shirts can be purchased here and will be available through the first part of the season.

Kum & Go isn't the only retailer getting ready for football season. Earlier this month, 7-Eleven, Speedway and Stripes convenience stores stepped up to help customers curate an iconic tailgate spread and more through the Fuel Your Football promotion, as reported by Convenience Store News.

7-Eleven is also offering fans the opportunity to win the ultimate "football" experience: an all-expense paid trip for two to attend seven games in 11 days across the United States. One winner will hand pick an itinerary filled with seven football, soccer or both games, which they will attend next year.

In late August, Wawa released its newest video featuring Baltimore Ravens tight end Mark Andrews to rev up excitement for the National Football League's pre-season and announce a social media sweepstakes. As part of its offering fans had a chance to win Baltimore Ravens game tickets, an autographed Ravens jersey, and more.