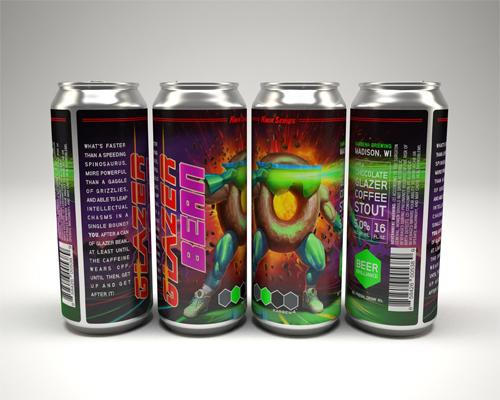 Glazer Bean is a chocolate coffee stout made with cold brew coffee, liquid cacao and lactose, and is made by Karben4 Brewing. Despite videos on Kwik Trip's social media platforms, no doughnuts were used in the beer, reported Green Bay Press Gazette.

"It's not a dessert beer or a pastry stout," said brewmaster Ryan Koga, adding that the cold brew is steeped in the beer for a day or two and then added back to the bright tank.

Kwik Trip approached the Madison brewery about making a beer for the chain but not a "white label beer," where they would use a current Karben4 beer and put the Kwik Trip name on it, according to Koga. After a tour of Kwik Trip's production facility, the two companies landed on a series of beers that would reflect the c-store but also stay true to the brewery's style of balanced beers.

The initial order for Glazer Bean was for 1,700 cases, or just under 200 barrels of beer, but the response has been "awesome," Koga noted. The original plans included getting the beer to every single Wisconsin Kwik Trip store; now, stores in Iowa are requesting the beer and last week, Karben4 began distributing the brew in Minnesota.