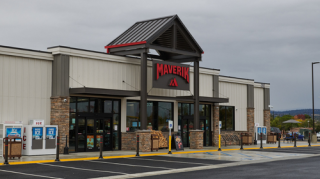 SALT LAKE CITY — Maverik — Adventure's First Stop is expanding its pilot food waste program in partnership with Feeding America, the largest domestic hunger-relief organization in the United States, as of this month.

The success of the pilot program prompted Maverik to expand it throughout its operating footprint, the company said. To date, the convenience store retailer has donated 276,878 pounds of surplus food, helping provide access to an additional 230,732 meals.

This donation, compared to dumping excess product into a landfill, equals the removal of the CO2 from 79 passenger vehicles from being driven for one year, according to the convenience retailer.

Maverik is contributing warmer items, such as burritos, bundles, pizzas, hamburgers and breakfast sandwiches; grab-and-go products such as salads, cold sandwiches and wraps, parfaits, tornados, cookies and muffins; and grocery items, such as candy, snacks and beef jerky.

"Maximizing food sourcing is a key priority for Feeding America," said Diane Letson, vice president of food industry partnerships at Feeding America. "Last year, for the first time, we secured more than 2 billion pounds of food through retail donations, and we're grateful for partners like Maverik that make donations at the store-level possible."

The retailer will work in partnership with Feeding America to identify additional convenience stores to expand its food waste program to additional states in support of member food banks that serve communities in the 12 states where Maverik operates.

Maverik believes that food should not be an impossible choice, the company noted. In the U.S., 66 billion pounds of food goes to waste each year, while hunger persists for millions of people. Feeding America's Hunger Action Month," aims to drive awareness and inspire action to help end hunger in America. Details are available at feedingamerica.org/hungeractionmonth.

In addition to launching its pilot food waste program, Maverik donated $2.3 million to more than 18 charities and community causes across its local markets in 2021. This includes more than $580,000 contributed to help neighbors in need through a series of donations to Feeding America. Maverik and its customers helped the organization enable more than 5 million meals to support neighbors fading hunger.