OAK BROOK, Ill. -- McDonald's is launching its new Premium McWrap sandwich in an attempt to court Millennials, a generation that does not currently rank the fast-food giant in its top 10 favorite restaurants, according to an Ad Age report.

The freshly prepared, meal-sized McWrap comes in the Chicken & Bacon, Sweet Chili Chicken and Chicken & Ranch varieties, each for a recommended price of $3.99. Calorie counts range from 360 to 600, depending on what kind of chicken, grilled or crispy chicken, is selected for the tortilla wrap. The McWrap is McDonald's first permanent menu item to include sliced cucumbers, and its first handheld entrée to include a fresh spring mix.

First launched in Poland by McDonald's Europe in 2004, the McWrap was tested in two cities in the United States before joining the nationwide menu this week.

In an internal memo, McDonald's calls the McWrap a "Subway buster" and notes that it "affords us the platform for customization and variety that our millennial customer is expecting of us," according to the report. The Oak Brook, Ill.-based chain did not comment on the memo, instead noting that Millennials remain "an important audience."

The demographic, which consists of approximately 80 million people in the United States, is important not just for its size but for the way it influences younger consumers in turn; 46 percent of households in the United States headed by a Millennial include children.

The variety and customization offered by the McWrap reflects attributes Millennial consumers say they value, and may serve to lure them back to the chain. While NPD Group data shows that hamburger chains make up 29 percent of the generation's quick-service restaurant (QSR) visits, that amount has declined 16 percent since 2007, and overall QSR visits by Millennials dropped 12 percent during the same time period.

Along with added choice and variety, Millennials value fresh and organic food, social change, sustainability and social-savvy brands, according to the report.

"Premium McWraps are a great example of how we can bring innovative new tastes to our customers in the U.S. by leveraging successful global menu items, in this case, from McDonald's Europe," stated Dan Coudreaut, McDonald's USA senior director of culinary innovation. "Also, the packaging design [seen below] was an important challenge for us as we wanted to ensure our customers can enjoy each bite; whether dining in our restaurants or on-the-go." 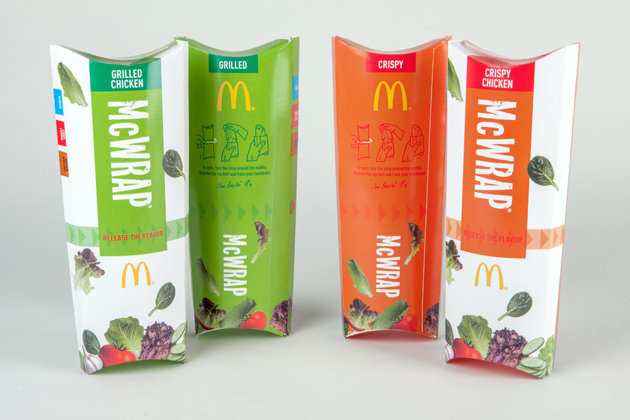