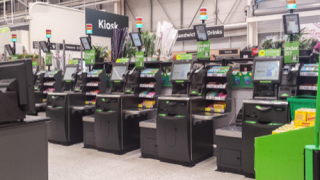 STATE COLLEGE, Pa. — With the adoption of self-checkout, retailers have benefited from the technology's ability to cut down on operational costs while improving the customer experience. However, front-end merchandising is lagging behind the times, according the latest Nugget from VideoMining titled Self-Checkout Changes the Front End Dynamics.

Self-checkout, which is growing rapidly in the convenience store channel, has become dominant in grocery stores. VideoMining behavior data shows that in 2021, 53 percent of all in-store transactions in grocery stores in the United States occurred at self-checkout. Additionally, between 2019 and 2021, the share of all registers in a grocery store that were self-checkout increased by 32 percent.

Because self-checkout skews toward smaller baskets and quick and fill-in trips, shoppers utilizing the technology have to wait for a shorter time and in different queue areas. As a result, retailers have a limited window of opportunity to engage customers with front-end merchandising, strategies that worked before may not work now.

"However, there is a significant opportunity to further 'course correct' merchandising and innovate to match the changing behaviors at the front end. Otherwise, retailers risk missing out on the full potential of the front end as an attractive source of incremental revenues," said Rajeev Sharma, founder and CEO of VideoMining.

"With more than 10 percent of all in-store transactions including a product from the front end, the financial impact from improving the front end can be significant in the current omnichannel retail landscape," Sharma said.

Leveraging a proprietary artificial intelligence-based platform and partnership with retailers to analyze data from more than 150 million checkouts per month across a national panel of grocery and convenience stores, VideoMining uncovered behavioral data that retailers should consider and optimize their merchandising strategy at the front end:

"Behavioral research can help in evaluating the true impact of current and planned front-end merchandising strategies. In the end, retailers have to trade off the key factors that they are trying to optimize, but just need to be aware of the holistic impact of the changes they make at the front end and test it carefully before a wide rollout," Sharma said.