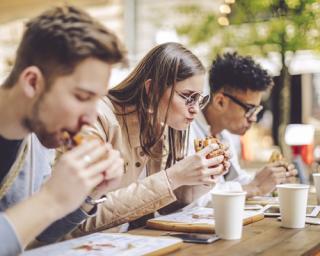 BOSTON — Convenience stores are stepping up to create new foodservice competition as Americans get busier.

According to a new GasBuddy survey, foodservice now makes up nearly 23 percent of sales at c-stores nationwide, growing 3 percent in the past five years. Additionally, 43 percent of millennials purchase more food from c-stores today than three years ago.

Three quarters (75 percent) of respondents believe c-store foodservice has improved in the past five years.

"Convenience retailers with compelling foodservice programs are a growing threat to quick-service restaurants," said Frank Beard, convenience store trends analyst at GasBuddy. "Data show that people choose convenience stores over fast food locations because of the convenience of an all-in-one stop for fuel and food, followed by a preference for the taste of the food at c-stores. Couple this with leading convenience brands like Wawa and QuikTrip rapidly expanding across the country, and fast food brands will be forced to find innovative ways to catch up."

Along with frequent visits to c-stores to purchase meals comes increased dollar spend. The study found that one in four Americans spend $6 to $10 per week on c-store foodservice, with nearly 20 percent of those aged 18-29 spending $10 to $15 per week.

The most-preferred meals at both c-stores and quick-service restaurants include sandwiches or wraps; fresh salad; pizza; burgers and fries; and fried chicken.

"Convenience brands are well-positioned to cater to consumer's tastes because they aren't pigeon-holed into one type of cuisine," Beard added. "Our study found that younger Americans prefer more variety, particularly with newer menu items like burritos and pizzas."

Speed is a concern, as nearly one third of consumers are only willing to wait five minutes for their meal.

When asked what they dislike about fast food establishments, consumers named unhealthy options as their top concern, followed by food quality, restaurant cleanliness and limited food and drink options.