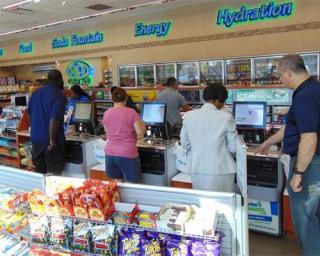 Nearly half of the surveyed retailers plan to add self-checkout in the near future.

NATIONAL REPORT — With technology touching nearly every aspect of convenience retailing these days, investing in more advanced technologies as a means to bolster one’s business is a no-brainer.

Convenience Store News’ 2018 Technology Study finds that convenience store retailers are once again committed this year to spending more money on technology to better serve their customers and their bottom line. Nearly 62 percent of retailers surveyed planned to make a greater investment in 2018, compared to 2017. Roughly 28 percent expected to spend the same, while just around 10 percent predicted less money would go toward tech this year.

The five goals c-store retailers have top-of-mind to accomplish in 2018 remain unchanged from 2017. Topping the list is better management at the store level in terms of inventory and revenue, followed by replacing aging point-of-sale (POS) systems, reducing theft and shrink, speeding up the customer checkout process, and better management of store labor expenses.

The biggest jump in the rankings this year was seen in becoming EMV compliant at the pump — rising four spots from No. 12 in importance in 2017 to No. 8 in importance this year.

On the other hand, respondents seem the least concerned about getting electronic car charging stations at their sites, with only 6.8 percent looking to tackle that enhancement this year, down from 13.3 percent in 2017.

When asked where they allocated their technology dollars in the past year, 93.5 percent of retailers indicated they spent in the automation space, a slight increase over the previous year.

Also continuing its stable trend as of late is how retailers are spending considerably more money on store-level technology than they are on technology for their headquarters. In the past year, 68.8 percent of retailers’ technology investment went to bolstering technology at their stores, while 31.2 percent was set aside for HQ operations.

Perhaps more interesting than what retailers have implemented to date is what they plan to add in the near future — specifically, self-checkout and biometric payment technology. This eagerness to provide a frictionless checkout experience comes on the heels of e-retailing monolith Amazon ushering its cashierless Amazon Go store with “just walk out” technology into the mainstream.

Only 8.4 percent of respondents say they’ve already added the convenience of a self-checkout solution to their stores, but a whopping 48.3 percent plan to add this convenience in the near future.

As for biometric payment technology, 51 percent of respondents have their sights set on adding the capability; something that only 6.6 percent of c-store retailers currently provide.

Investing in the Future.pdf
Advertisement