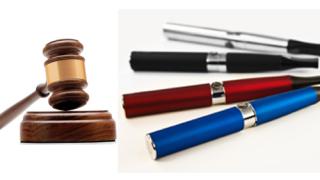 The ban on the flavored products went into effect on Sept. 18 following a vote by the state Public Health and Health Planning Council (PHHPC) on Sept. 17. According to Gov. Andrew Cuomo's office, the New York Department of Health (DOH) will provide retailers with an approximate two-week grace period before conducting visits to enforce the flavoring ban beginning on Friday, October 4.

Local health departments and the DOH's district offices, with state oversight, will handle enforcement. Retailers who violate the ban face fines of up to $2,000 per violation, which is defined as each unit of flavored e-liquid or product containing e-liquid that is possessed, manufactured, sold or offered for sale.

"It is undeniable that vaping companies are deliberately using flavors like bubblegum, Captain Crunch and cotton candy to get young people hooked on e-cigarettes — it's a public health crisis and it ends today," Cuomo said. "New York is not waiting for the federal government to act, and by banning flavored e-cigarettes we are safeguarding the public health and helping prevent countless young people from forming costly, unhealthy and potentially deadly life-long habits."

The policy does not include menthol; however, state DOH Commissioner Dr. Howard Zucker will evaluate a ban on menthol flavor and offer recommendation within 14 days.

The PHHPC meeting came two days after Cuomo signed an emergency executive action calling for the state to look at banning the sale of flavored vapor products in New York.

According to the New York Association of Convenience Stores (NYACS), the council vote passed after listening to three hours of public comments. Though the association did not know the meeting would hold a public comment portion, NYACS did submit a letter requesting a 60-day grace period enabling retailers to sell down any inventory still on hand as of the effective date, according to the Albany-based group.

The ban is in effect for 90 days and the PHHPC can extend it following that date. The state DOH can also adopt permanent regulations prohibiting the sale of flavored e-cigarette and vapor products.

The regulation also said "the impact on businesses where e-cigarette sales is not the focus of the business (e.g., convenience store) will have no job impact from this regulation as e-cigarettes make up only a small percentage of their sales."

It does, however, acknowledge that outlets that focus the bulk of their business on e-cigarettes and e-liquids will be affected. Those retailers will still be able to sell vapor devices and unflavored, menthol or tobacco flavored e-liquid.

According to the New York State Vapor Association Inc., flavored vapor products, represent 90 percent of vape shop sales. The ban, it added, would force the closure of every Main Street America "mom and pop" vape shop in New York.