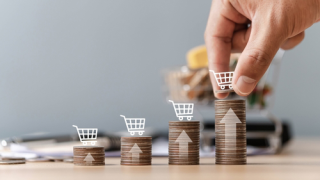 WASHINGTON, D.C. — While gross domestic product (GDP) isn't likely to grow as much in the final months of 2022 as it did during the third quarter, consumer spending should remain strong even though its rapid pace is continuing to slow.

"The third quarter's results clearly dispelled the notion that the U.S. economy is in a recession, and the silver lining was the ongoing resiliency in consumption," wrote National Retail Federation (NRF) Chief Economist Jack Kleinhenz in the December issue of NRF's Monthly Economic Review. "Nonetheless, the economy is cooling and interest-sensitive sectors, in particular, have seen a significant pullback.

"GDP is expected to grow very gradually in the closing months of 2022, at best about half of what was recorded in the third quarter," he continued. "Consumers are stepping back to a degree and changing how they allocate their resources."

Higher interest rates adopted by the Federal Reserve to slow inflation have driven up the cost of mortgages, making new homes unaffordable for many would-be buyers, the report said. Additionally, spending on services is continuing to bounce back from the pandemic, causing a shift away from spending on retail goods.

Even with inflation, however, "the willingness to spend has been stable," the report said. Retail sales for the first 10 months of the year increased 7.5 percent year over year, on track to meet NRF's forecasts that 2022's overall retail sales and November-December holiday sales will both grow between 6 percent and 8 percent, respectively, over 2021. While the pace slowed to 6.5 percent in October, that was largely due to the comparison against strong early holiday shopping in 2021.

An additional 261,000 workers were added to payrolls in October after the number of job openings rose to 10.7 million in September, up from 10.3 million in August.

Heading into 2023, Kleinhenz acknowledged that "there will be economic hardships," and some consumers may feel like they're in a recession. "But for those who have jobs and feel secure about their employment, spending will continue," he noted.

On Dec. 2, President Joe Biden signed a bill to avert a freight rail strike that he said could have "plunged" the U.S. into recession, The Associated Press reported.

Members in four of the 12 unions involved rejected the proposed contract, creating the risk of a strike beginning Dec. 9 that the government has likely staved off with the bill signing, AP reported. A freight rail strike also would potentially have a large impact on passenger rail, with Amtrak and many commuter railroads relying on tracks owned by the freight railroads.

According to Biden, a strike would have sunk the U.S. economy, causing roughly 750,000 job losses as the work stoppage ruptured supply chains for basic goods, food and the chemicals needed to ensure clean drinking water.

NRF commended the Senate's passage of H.J. Res. 100, or the Tentative Agreement.

"The freight and commuter rail systems are essential partners to America's retailers, moving goods throughout the country every day. A nationwide rail strike at this juncture would have had devastating consequences for our economy, and exacerbated inflation for American families," said NRF President and CEO Matthew Shay.

"We are grateful for the swift action in Congress this week to implement the Tentative Agreement, and we look forward to President Biden's immediate signature to safeguard smooth and stable rail operations," he concluded.