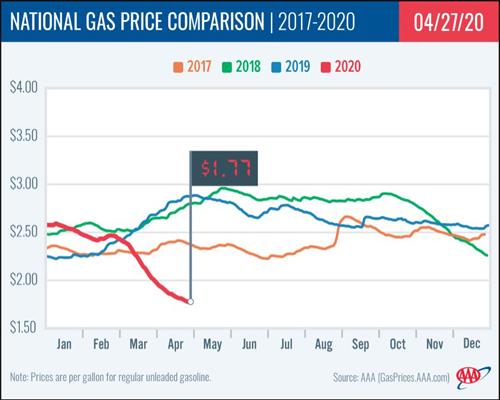 NATIONAL REPORT — As gas prices continue to push cheaper across the country, only one dozen states carry an average of $2 per gallon or more.

"AAA forecasts that the national average will continue to decrease into next month, possibly dropping as low as $1.65," said Jeanette Casselano, AAA spokesperson. "We haven't seen gas prices that cheap since January 2009."

Some states could see minimal fluctuation at the pump in coming weeks if demand jumps as businesses are given the green light to re-open. However, this will not have a large impact for the majority of the nation's motorists, according to AAA.

The cheapest gas price averages can be found in the Great Lakes and Central States region. Seven states from the region land on the top 10 list for cheapest averages in the country: Wisconsin, Ohio, Michigan, Kentucky, Indiana, Missouri and Iowa.

On the week, state gas price averages decreased as much as 5 cents in the region.

Pump price averages continue to decline among South and Southeast states, though the rate at which they are declining has slowed compared to earlier this month, according to AAA. In the last seven days, most states saw averages decrease by 3 or 4 cents.

On the week, motorists filling up in Washington, D.C. saw an increase at the pump (3 cents). This was not just the only increase in the Mid-Atlantic and Northeast region, but also the country. The majority of states in the region saw weekly decreases of 2 to 4 cents.

Washington, D.C., New York and Pennsylvania land on the top 10 list for largest state averages in the country, while Virginia carries the cheapest average in the region at $1.65.

Idaho, Utah and Montana land on the top 10 list for the largest weekly decreases. Idaho's decrease was the largest in the country.

The West Coast region continues to see significant decreases despite carrying some of the most expensive averages in the country. On the week, Alaska saw the largest decline in the region and the country with 9 cents. 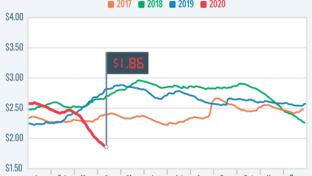