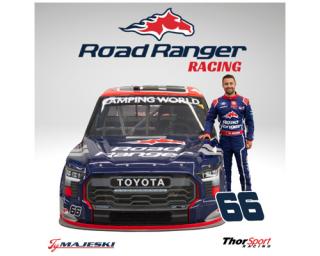 Parkland announced a multi-year partnership with Chip Ganassi Racing. Parkland is an international food and convenience store operator, independent supplier and marketer of fuel and petroleum products and leader in renewable energy. Its brands will be featured on select NTT INDYCAR and Indy Lights series cars.

"We're looking forward to working with Parkland and helping them to bring excitement to all of the communities they serve," said Chip Ganassi, team owner of Chip Ganassi Racing. "Parkland believes in our entire organization and I'm proud to share that they'll be the first sponsor to support both our NTT INDYCAR and Indy Lights Series teams."

Calgary-based Parkland has extensive operations in Canada, the United States and in 23 countries across the Caribbean, Central America and South America. It has more than 3,000 retail locations and a portfolio of brands, including its high-performance Ridgeline lubricants brand.

"Partnering with Chip Ganassi Racing to put our industry leading brands center stage at Motorsports biggest events is a tremendous opportunity for us," said Ian White, senior vice president of strategic marketing and innovation at Parkland. "Delivering high-quality products and experiences to our customers closely aligns with the level of commitment and quality race fans have come to expect from the Ganassi team. We look forward to an exciting racing season."

The first Parkland brand to be featured during the 2022 season is Ridgeline performance lubricants. This lubricant and specialty products brand made its Ganassi debut ahead of qualifying for the Indianapolis 500 as CGR sought its fifth title on Memorial Day weekend. Ridgeline will also receive primary branding at select events throughout the season, starting at the Iowa Speedway on July 23.

"The partnership with ThorSport Racing is an exciting new journey that we are thrilled to embark on. Ty is someone we are especially excited to partner with, as his career in NASCAR Truck series racing is kicking into high gear, just like ours," said Marko Zaro, CEO at Road Ranger. "By the end of 2022, we plan to expand from 43 to 54 locations. The future growth plans do not stop there. Just like Ty's career, we believe the sky's the limit."

With 43 travel stops across seven states, Schaumberg-based Road Ranger is the fourth-largest travel center chain in the United States. Locations can be found on major highways in Illinois, Wisconsin, Iowa, Missouri, Indiana, Arkansas and Texas. As the plan for growth continues, it will soon expand to neighboring states.

"With the launch of our new Ranger Rewards Loyalty App, we figured there was no better time to reach out to the most brand-loyal fans in the world: NASCAR fans of course. I think I speak for my entire team when I say that we are beyond ready and excited to partner with ThorSport Racing and Ty Majeski," said Ryan Arnold, Road Ranger vice president of marketing. "As Road Ranger continues to expand our fuel network, our focus on customer-centric marketing that is designed solely around the customer's needs and interests is a top priority."

With seven races complete in the 2022 season, Majeski has two top-five and four top-10 finishes, and 22 laps led in addition to his pole award at Daytona International Speedway.

"Being from Wisconsin, I could not be more thrilled to partner with Road Ranger, a Midwest-based company. Building a partnership with not only the Road Ranger brand, but the individuals at Road Ranger has been a great experience so far. I am looking forward to representing them on and off the racetrack," said Majeski.