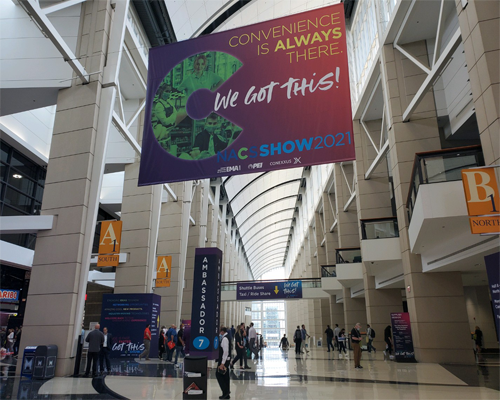 CHICAGO — NACS 2020-21 Chairman and Texas Born CEO Kevin Smartt kicked off the Wednesday general session at the 2021 NACS Show by reflecting on the time that has passed since the last in-person NACS Show, as well as what hasn't changed during that time.

"Seven hundred and thirty-three days. That's how long it was since we were last together in person," Smartt said, noting that while a whole lot has changed in that time, what hasn't changed is the industry's resilience. "It goes beyond what we sell. It's who we are. It's about our strength and our character."

For Rhoads, it became clear that something big was happening when he flew home from the 2020 NACS Day on the Hill and his nonstop flight home was nearly empty.

"You could tell something was different," he said.

As New York City soon became the epicenter of the pandemic in the United States, "there was so much uncertainty," recalled Krupa. However, with the question of how she and her staff could stay safe also came the question of how they could serve their community. The store stayed open and launched the Surprise Snack Box campaign for healthcare workers on the front lines.

Today, The Goods Mart makes a habit of supporting the community in both direct and indirect ways.

With many stores closing and businesses focused on the essentials, emerging brands suffered. The Goods Mart makes a regular habit of highlighting emerging brands and getting consumer feedback. It also invites consumers to "do good" and connect through community events.

"We can get stronger at the end," Krupa said.

The 36 Lyn Refuel Station’s neighborhood "became famous for something we really didn't want to" when George Floyd was murdered last year just a few blocks away, McQuirter discussed.

In the days and weeks that followed, in the midst of continued social unrest, McQuirter and his staff continually talked about how to make people feel safe and OK, and about what they needed, which ranged from cleaning supplies to fire extinguishers.

A longtime supporter of Open Streets Minneapolis, which features free, family-friendly events on temporarily closed roadways, McQuirter participated through events such as live music played from his store's roof.

Not only do these events bring people together and the community sees the store staff in a different light than the people they give money to, but it also helps lower turnover, he said.

"We're all about community," Rhoads agreed, describing The Convenience Group's participation in a pop-up food bank that served 250 cars in 55 minutes last year. "This industry is about community."

Armour concluded the session by encouraging c-store retailers everywhere to highlight their commitments to community and make plans for the next 24/7 Day, which recognizes frontline workers, first responders, medical personnel. and American Red Cross volunteers. In 2021, nearly 30,000 c-stores participated.

"We expect that to continue to grow in the future," he said. "It's an amazing achievement."

Moving Into the Digital Space

Before the COVID-19 pandemic, consumers were beginning to embrace digital as a way of life. The events of the past year and a half only accelerated that transition.

Customer expectations are changing, and those changes are not being driven by the convenience channel, but rather by customers’ favorite apps on their phones, according to Sam Herro, director of business development at Hathway, who said the channel is not meeting the new expectations.

Pointing to research Hathway conducted pre-pandemic, 83 percent of respondents said they would use a convenience store app. But that need isn’t being met, Herro said during the "Modern Strategies for Customer Engagement and Loyalty" education session at the NACS Show. C-store apps are not currently keeping customers engaged, he explained.

While most c-store retailers have indicated that digital is toward the top of their tech agendas, the numbers don't support the level of priority. According to Hathway research, 56.5 percent of c-store brands lack any digital capabilities.

The convenience channel is not the first industry to be disrupted by the digital evolution; it is just the latest, noted Whitney Getz, former vice president of digital and loyalty at Burger King.

When getting started along the digital journey, Getz said it is important to remember that it's not digital for digital's sake. Instead, retailers need to focus on a solution that can save their customers time or money, or both. "Solve customers' problems through digital and they will flock to it," she added.

Casey's General Stores Inc. is one convenience retailer traveling along a digital path.

Art Sebastian, vice president of digital experience at Casey's, acknowledged that the convenience channel is behind, but he believes there is time to catch up.

"Convenience is no longer just a channel. Convenience is a need state for consumers and a strategy for retailers," he said. "Digital is well set up to deliver convenience."

Value isn't just a concern for consumers looking to get the best deal possible on their c-store purchases. Retailers and suppliers, along with distributors, sales agencies and other service providers, can work together to maximize value and the impact the supply chain has on c-store shoppers.

Mary Mamalakis, director of category management at c-store chain RaceTrac Petroleum Inc., explained that retailers will be more receptive to a new product if it is incremental to the existing offering and easy to integrate. If RaceTrac has 28 deliveries in its regular delivery schedule, she said it is unlikely to add a 29th for a single new item, so integrating with an existing distribution model is "critically important."

George Fournier, president of EG America, urged suppliers to always emphasize the details. Convenience retail is sophisticated, and something as small as a missing UPC code on a single unit can derail everything. "If you forget a little detail like that, we can't operate," he said. "It's as important as the marketing plan."

Yesway Chief Marketing Officer Derek Gaskins concurred, noting that "retail is details." He also discussed how retailers and suppliers can work together to create a winning culture that might not exist otherwise.

Years ago, soon after Yesway entered the c-store industry, the company was selling a dream of what Yesway could be. Some suppliers were skeptical and not eager to work together until the retailer reached a certain store count. Others, however, took Yesway seriously and invested in the company, and today they are among the chain's strongest partners.

"There can be wins through successful partnerships," Gaskins said. "At the end of the day, it's a relationship business."

Wednesday gave NACS Show attendees their first access to the expo floor. This year’s expo features 400,000 net square feet of space featuring more than 1,200 exhibitors, as well as exclusive areas for previewing, such as the New Exhibitor Area and the Cool New Products Preview Room.

Walking the show floor and meeting with exhibitors, Convenience Store News editors spotted several different ways to boost candy and snack sales on display. Among them: