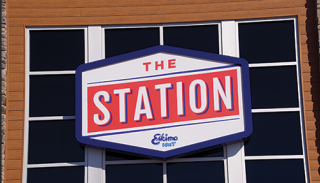 AMARILLO, Texas — You could call it growth by daiquiris.

The past year saw Eskimo Hut hit a milestone as the Houston-based retailer revamped its original Daiquiris To-Go store, just outside of Amarillo, into a brand-new concept called The Station by Eskimo Hut, the company's first full-service convenience store open 24 hours a day, seven days a week with branded fuel and a quick-service TexMex restaurant.

Boasting more than 7,000 square feet, The Station still serves up daquiris, as well as offering self-checkout with touchscreen ordering; a huge array of beverages including more than two dozen varieties of self-serve tea; a walk-in beer cave; 50-plus types of jerky; and "the cleanest family bathrooms in the Texas panhandle," according to Chief Operating Officer Chris Smith.

Owner Kevin Morgan, who started Eskimo Hut's Daiquiris To-Go/mini c-store concept in 1996, said he and his team evaluated a lot of different convenience store and quick-service restaurant operations, and by 2019, were seriously planning The Station concept.

"We were in the design stage when COVID hit. It slowed construction a bit," Smith relayed. Nevertheless, the original Eskimo Hut location remained open until Dec. 31, 2020, and by August 2021, the site had been completely rebuilt into The Station.

The TexMex restaurant, Cowboy Tacos & Burritos, where food is made daily in a restaurant-quality kitchen, is at the core of The Station. "The success of the food is going to be the success of the whole project," said Smith, who came to the company in 2018 bringing corporate restaurant experience from Chipotle and Smashburger.

Made-to-order tacos, burritos and bowls are served up at The Station "Chipotle-esque," he said. Many items, such as the pinto beans, are house-made. "We're [also] roasting poblano peppers and then making our own cheese sauces, blended with diced poblanos. The flavor is fabulous," Smith boasted. "In Amarillo, no one comes close to us in the food offering. This is where the biggest opportunity is."

Nearing its first-year anniversary, The Station is constantly reevaluating its food offering, looking for areas that could be tweaked and/or expanded. For instance, the store has added a "Cowboy Bun" — essentially, a yeast roll wrapped around a Jimmy Dean breakfast sausage with cheese and bacon. It's also introduced a pumpkin muffin to its offering of fresh baked goods, which includes scones as well.

"We will continue to look for new menu items we can offer — both line extensions and new lines," Smith explained. "We're not getting in prepackaged or frozen items; we’re actually cooking in there."

There is no in-store dining/seating area inside The Station for Cowboy Tacos & Burritos. To save on square footage (needed for the kitchen), it is a takeout-only restaurant. However, in keeping with Eskimo Hut's drive-thru daiquiris heritage, The Station has a drive-thru where customers can order anything from the restaurant or the c-store. This includes frozen daiquiris, of course.

"As we evolve and identify people on the c-store side with a particular interest or ability to work on the kitchen side, we will cross-train," said Smith. "The two GMs were cross-trained, but we decided to keep the staff separate because they are two separate concepts, really."

A Place for Families

In addition to fresh food, The Station is committed to providing clean restrooms and "convenience with a smile." Smith speaks highly of the restrooms, calling them "the best bathrooms anywhere in West Texas." The Station even features family bathrooms, which include a kids' potty and a kid's sink stand.

"We make it a place where families want to come, and the bathrooms are a big part of that," he explained.

The c-store side of the business offers an extensive beverage selection including self-serve teas (hot and cold) and specialty coffee drinks, such as café latte, cappuccino, macchiato, Mexican hot chocolate, mocha espresso, and more.

A double-fountain station offers two ice options — crushed or cubed. "We offer a 44-ounce fountain drink for 99 cents. It's the best price in town," Smith stated. "We also have bags of ice at the cheapest prices; we’re our own merchandisers."

The c-store also stocks a wide selection of packaged snacks, including an extensive jerky section. Customers can find exotic meats like ostrich and alligator.

"We have every type of jerky at the best prices," said Smith.