KNOXVILLE, Tenn. — Pilot Co. continues to make progress on its New Horizons initiative with the recent opening of one newly built travel canter in Palmdale, Calif., and the completion of eight more remodels in its existing footprint.

To commemorate these stores with customers and team members, the travel center operator teamed up with Monster Energy and local community partner organizations to host on-site events from California to Missouri featuring BMX bike shows, break dancers, special guests, giveaways and more than $100,000 in donations to area schools.

The festivities were held throughout September and will continue in October with special offers and giving back check presentations at three locations with newly completed remodels.

"Our team works hard to open a new store and make these remodels happen, and it's a moment of pride for them to celebrate with their family, friends, communities and guests," said Allison Cornish, vice president of store modernization at Pilot Co. "Being that September is also when we recognize Driver Appreciation, it was only fitting that we go even bigger with these events to create a fun atmosphere for professional truck drivers and community members to gather together and have a good time." 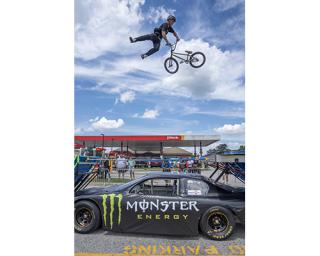 The three-year, $1 billion New Horizons initiative is the company's most significant investment in store modernization to date. It will fully remodel more than 400 Pilot and Flying J travel centers and make additional upgrades at several more locations across the country.

Through Oct. 23, guests can save 25 percent on food and beverages at the Hope Hull, Joplin, and Sullivan locations by entering the promo code PFJOctober in the myRewards Plus app.

Additionally, to help guests go farther, Pilot Co. is offering a 10-cents-per-gallon gas discount at all participating Pilot and Flying J travel centers through Oct. 31, along with weekly deals to save on popular snacks and beverages with the myRewards Plus app.

As part of the New Horizons initiative and in honor of its history of giving back, Pilot Co. is donating a total of $110,000 to 10 local school districts in the recently remodeled and new store locations to support their robotics programs, purchase needed equipment such as projectors and expand their creative labs.