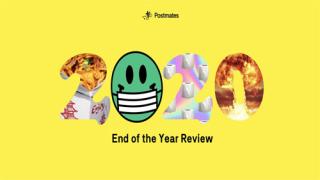 SAN FRANCISCO — Nearing the end of one of the most unique years in history, delivery service Postmates unveiled unprecedented ordering trends of 2020.

"To say 2020 was a year like no other is an understatement. From people's favorite restaurants to essentials like hand sanitizer and toilet paper, Postmates became the link between hundreds of thousands of businesses and people's homes," said Eric Edge, senior vice president, marketing and communications at Postmates. "We are in awe of the creativity, generosity and hope people displayed this year and are  grateful for the heroes on the frontlines, including the Postmates fleet and our merchant partners, who continue to get us  what we need in unprecedented times."

Customers fell in love with heart-shaped pizzas this year, which skyrocketed 1,800 percent year-over-year (YoY) on Valentine's Day, where there was also a 4,462 percent week-over-week increase in orders for flowers.

The week of April 24, bleach took over the headlines and Postmates saw an 862 percent spike in orders.

As events went virtual during May, like EDC: Las Vegas Virtual Rave-a-Thon, a customer added more than 10,000 hot sauce packets to their order during the event.

Summer saw the biggest spike in party favors ordered during the pandemic for at-home birthdays and graduation celebrations in June. The No. 1 item ordered was balloons. Around that time, hair supply orders increased, with Postmates delivering five times the amount YoY.

National Ice Cream Day on July 19 beat out all the National Food Days as the most popular. Additionally, as live sports returned to TV, Postmates customers ordered pizza, tacos and chicken wings for gamedays.

Despite the decrease in trick-or-treaters, candy orders were up 38 percent compared to 2019.

Alcohol orders were popular and saw a 49 percent YoY increase this year, with consumers ordering the most in April (65 percent month-over-month).

For the first Presidential Debate in September, consumers were mostly reaching for Chinese food but on Election Day the most popular items ordered were pizza, alcohol and desserts like cupcakes and ice cream. On Saturday, Nov. 7, celebrations were in order with a 445 percent week-over-week surge for bubblies including champagne and Prosecco.