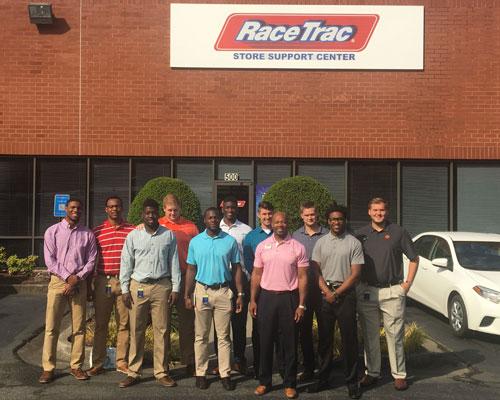 ATLANTA — RaceTrac Petroleum and University of Georgia (UGA) are joining forces to help create career paths for the institution's student-athletes.

"The purpose of the micro-internship is twofold. One, for the student-athletes to gain exposure into the workforce and build their network. Two, for companies to see how transferable student-athletes' skills are from their sport to a full-time corporate job," explained Rachel Patton, RaceTrac's university relations specialist.

According to UGA, RaceTrac and the university have had a fruitful relationship for a number of years: UGA has the highest representation among college alumni at the c-store operator's home office, known as the Store Support Center. A conversation last January between Patton and UGA's CFR team about RaceTrac’s micro-internship idea evolved quickly.

"When CFR reached out about this opportunity, I was excited about the innovative program structure and the possibility of partnering with such a large company," said Leigh Futch, director of student development for the UGA Athletic Association.

Futch created The Georgia Way, a comprehensive career development program aimed at preparing student-athletes for success after athletics — regardless of when that time comes. An integral part of the program is connecting UGA student-athletes to resources that will enable a smooth transition to the professional world. RaceTrac's micro-internships seemed to be a perfect fit, according to UGA.

"We were able to pull this together very quickly. It was truly a team effort," said Patton. "From the initial conversation with CFR to planning interviews of UGA's football players in April 2018, we moved fast."

RaceTrac, Futch and UGA Athletics worked together to identify upperclassmen and football players who were majoring in areas related to four of RaceTrac's departments: Reporting and Insights, Financial Planning and Analysis, Human Resources and Operations.

A total of 16 students were interviewed by a panel of RaceTrac senior/executive-level staff before four were chosen as the first RaceTrac interns to begin working at the Store Support Center in May 2018. The four UGA student-athletes were joined by six Clemson University student-athletes, and each intern was assigned to one of the aforementioned departments for their two-week stint.

The interns were tasked with projects they'd have to present to RaceTrac staff at the end of the program, and they were immersed in RaceTrac's corporate environment by attending orientation sessions, networking events, assessment workshops and more.

According to UGA, plans are in place to repeat the program with more schools and other companies are taking notice of RaceTrac's creativity.

"RaceTrac has been an engaged and innovative partner," said Jill Walton, UGA's CFR executive director. "They've done things that other companies haven't done before. They took the lead with micro-internships, and now there are other companies asking about how they can participate."

The program's success also speaks to the strength of the RaceTrac-UGA partnership and of UGA's alumni network, the university stated. Patton's relationship with RaceTrac began when a UGA sorority sister made a connection for her at the company, and now, through these micro-internships, she can do the same.

"Working on this program as a UGA graduate means the world to me," said Patton. "And to be a part of a company like RaceTrac, where our leadership and team members value the type of students that UGA helps to grow, is amazing."