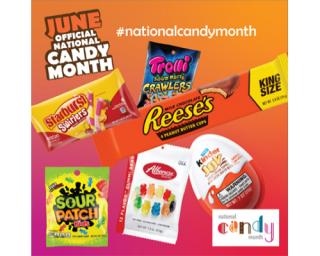 Created by the National Confectioners Association (NCA) and launched in June 2016, National Candy Month serves as a national awareness movement that celebrates chocolate and candy as summertime treats that encourage emotional well-being.

"Our objective for this campaign was to promote National Candy Month in June by collaborating with our vendor partners to offer incentives for our retailers, engaging contests for SAS sales team, and a framework for retailer activation of this promotion to consumers," said Christa Verrier, category manager — confection, SAS. "Ultimately our goal was to drive sales for SAS, our suppliers and retailers."

Major confection manufacturers such as The Hershey Co., Mars Wrigley, Mondelez International, Ferrero, Ferrara Candy Co. and Albanese supported the campaign by offering special promotions throughout SAS's Monthly Marketing Publication. Each company selected a blockbuster item with a "WOW" promotional detail for retailers that would also be the focus of an internal sales contest.

SAS sales representatives competed within their sales regions by promoting these blockbuster items throughout National Candy Month. The winning sales region with the highest target goals achieved was awarded prize money to be split among the team.

As a final piece of the campaign, SAS produced point-of-sale kits, which included door and window clings as well as shelf danglers, that were offered at no cost to retailers to complement their in-store merchandising.

"Overall, I'm very pleased with the success of this campaign. SAS is uniquely positioned as a wholesale distributor in the convenience channel to bring together manufacturers and retailers to promote National Candy Month," Verrier said. "We look forward to continuing to bring these innovative opportunities to our retailers in the future."