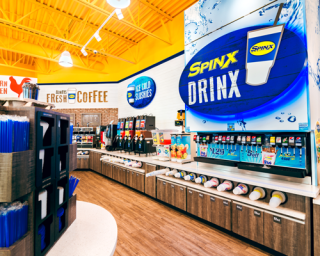 The Spinx Co. recently debuted its largest convenience store to date in the Charleston area.

The 6,188-square-foot store — the company's 11th location in the Charleston area — is situated 20 miles from the downtown Charleston peninsula, with a fresh water lake on one side and the salty Atlantic Ocean on the other.

Spinx decided Charleston was fitting for its most sizable location because South Carolina continues to grow demographically with a diverse population, coupled with its robust economy and workforce.

"Market research showed a dramatic change from 2006 to 2011, so it lit a fire for us to grow in Charleston," Spinx founder and Chairman Stewart Spinks told Convenience Store News. "Plus, I grew up in Charleston, so I’m prejudice to going back home where I started."

The system utilizes a 3-D scan of each vehicle to precisely target soap and high-pressure water based on the size and shape for the most accurate clean. The new tunnel wash is also equipped with specially engineered blowers to achieve a drier vehicle while conserving energy.

"Successful companies, whether they be a McDonald’s or others in the c-store industry, that have a proven concept continue to build on [that concept]. This will be our fifth- or sixth-generation store, so this concept has got to take us a long way down the road," Spinks explained.

The c-store chain plans to focus on growth in the Charleston area for the next two years at least. Headquartered in Greenville, S.C., Spinx operates more than 80 convenience stores in South Carolina and is the largest privately held company in the state.

Originally, the retailer planned to build 15 stores in Charleston, but has since doubled that number to 30 since it has found "so much success already," Spinks shared.

Check out the May 2018 issue of Convenience Store Newsfor more on Spinx’s largest store.