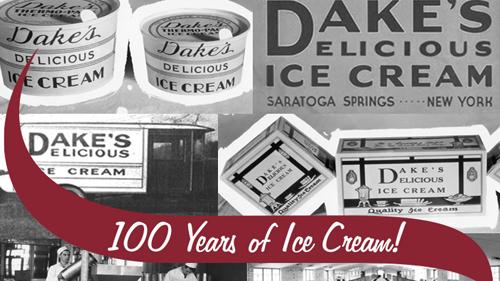 BALLSTON SPRINGS, N.Y. — Every convenience store chain is known for something. It may be the colors of the banner, or a signature menu item, or it can be combination of things. With Stewart's Shops, it's ice cream.

This year the convenience store chain marks 100 years in the ice cream business. The milestone is being celebrated with a "Century of Ice Cream!" exhibit at the Brookside Museum in Ballston Spa.

The company's affiliation with — and affinity for — ice cream began in 1921 when dairy farmers Percy and Charles Dake satisfied the consumer's growing sweet tooth by shifting to ice cream production.

The move was successful; they sold 4,000 gallons in the first year, according to Stewart's Shops, and that was the beginning of Dake's Delicious Ice Cream.

With a borrowed $10,000 in hand, Charles and Percy Dake converted a railroad freight station into an ice cream manufacturing plant. They purchased a bright red Model-T delivery truck, painted "Dake's Delicious Ice Cream" on the side of it and began delivery of bulk ice cream to Saratoga, Troy, Schenectady, and Albany for $5 per five-gallon can.

They relocated the ice cream plant a few times, first to a new state-of-the-art building for $150,000 with the help of Robert McMullen, and eventually to McMullen's cow barn in 1950.

The Dake Family expanded into the convenience store business when it bought a small dairy and ice cream business from Don Stewart in 1945. This became the first Stewart's Shop on Church Avenue in Ballston Spa.