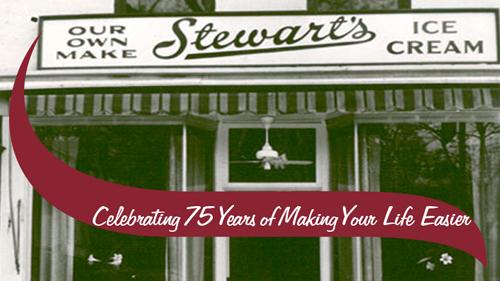 SARATOGA SPRINGS, N.Y. — Stewart's Shops is going back to its roots in honor of its 75th anniversary.

National Coffee Day also falls during the weeklong celebration, and customers can get free hot, iced or cold brew coffee from noon to closing on Sept. 29. The deal excludes coffee and cold brew refreshers.

In 1945, Charles V. and Percy Dake purchased the first Stewart's Shop with a small dairy attached on Church Avenue in Ballston Spa from Donald Stewart. The original business focus was on ice cream and benefited from a few unique advantages. The owners added milk, bread and snacks to its stores to offset the slow ice cream sales during the winter months, according to the company.

Retail fuel sales came to the chain in the 1970s and self-serve coffee was introduced with glass pots in the 1980s.

The 21st century brought a foodservice platform as Stewart's Shops expanded its kitchen to prepare meals for both in-shop dining and take home food options in the 2010s.

"With this series of innovations, Stewart's is in a unique position to maintain profitability and stability to make investments and grow. We have invested over $150 million in shop construction over the past three years. With no signs of slowing down, we have 19 new shops planned in 2020 and a 60,000-square- foot addition to our warehouse/distribution plant to be completed in 2021. The warehouse expansion will further enhance the vertical integration that has made Stewart’s what it is today," the company said on its website.

To read more on the retailer's 75-year history, click here.