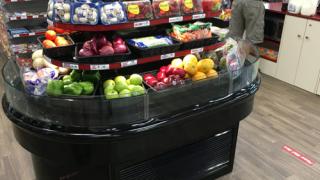 The retailer welcomed guests at its latest store this week in Port Henry. Though it features all of the traditional offerings found across its network, at 4,186 square feet the chain refers to it as a "Super Stewart's."

Port Henry is a hamlet in the town of Moriah on the western banks of Lake Champlain and draws summertime visitors for hiking, fishing and camping, according to Stewart's Shops. The only market in town, Mac's Market, decided to close its doors leaving a retail void in town — and that's where Stewart's Shops stepped in late fall 2019.

This new shop offers an expanded fresh produce line, including bananas, tomatoes, limes, lemons, oranges, apples, lettuce, onions, potatoes and cucumbers. The shop also provides a quick place to get breakfast or lunch, and to stock up on essentials like milk, bread and eggs.

Stewart's Shops will officially debut the store at a grand opening on July 31. To celebrate the ribbon cutting, the store will offer food and drink specials all day, including 50-cent ice cream cones, 99-cent sodas and Refreshers, 99-cent hot dogs and roller grill items, and $6.99 whole pizzas.