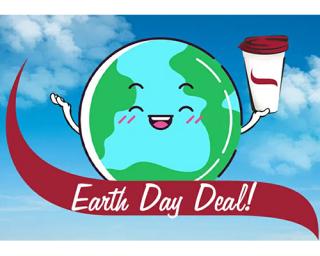 The retailer encourages customers to "go green and save some green" through its everyday coffee refill program, which allows customers to refill up to a 32-ounce reusable mug for the same price as a small coffee.

The c-store chain also shared some Earth Day facts about its efforts to become more sustainable. The Stewart's Shops plans has more than 2,400 individual solar panels on its roof that supply 75 percent of the power to 50 of its locations. The energy created by the solar panels is equivalent to taking 80 cars off the road each year, the company said. Stewart's also uses solar energy from two offsite locations in Halfmoon and Castle Creek.

Other sustainability steps include:

Stewart's is also committed to expanding its electric vehicle (EV) charging network through its partnership with EVolve NY. The retailer intends to have more than 82 EV charging stations at 16 shops by the end of 2022. It currently has five Tesla Super Chargers operating at stores in Ballston Spa, Chestertown, Clinton Corners, Hudson, and East Rutland, N.Y., with plans to expand the program by three more at the end of the year.

Sheetz Inc. announced it is launching a donation-matching challenge of $25,000 to support American Forests, a national organization dedicated to conserving and restoring forests, advancing the retailer's commitment to help build a sustainable future.

Starting on Earth Day, customers can make an impact and ensure the country's forests are healthy for years to come by donating their loyalty points to American Forests directly through the Sheetz mobile app. For every 200 points they donate, $1 will be donated to American Forests, with Sheetz matching customer donations up to $25,000

Sheetz's donation challenge will run through May 21.

Donations will go directly toward planting trees in the eastern United States and will help support the organization's overall mission of creating healthy and resilient forests that deliver essential benefits for people, water and wildlife.

"Sheetz is dedicated to being a responsible steward of our environment," said President and CEO Travis Sheetz. "Through partnerships with organizations such as American Forests who are making a direct impact, to new energy efficient stores, alternative fuels, electric vehicle charging stations and much more, we will continue to build on our progress to make a positive impact on the communities we serve."

In January, Sheetz celebrated the two-year anniversary of joining the Better Buildings Challenge, an initiative led by the U.S. Department of Energy to reduce energy output by 20 percent over the next 10 years. Since joining the Better Buildings Challenge, Sheetz's stores have already reduced their energy intensity by 14 percent, the company said.

Other steps the retailer has taken to reduce its overall impact on the environment include:

Established in 1952 in Altoona, Sheetz Inc. is a family-owned and operated convenience store chains with more than 23,000 employees. The company operates more than 640 store locations throughout Pennsylvania, West Virginia, Virginia, Maryland, Ohio and North Carolina.