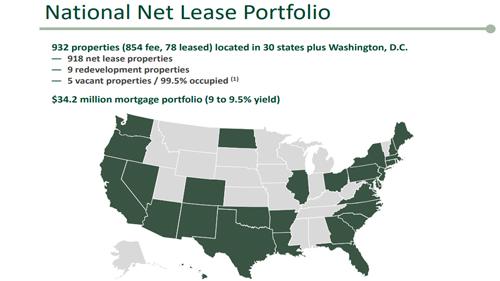 The real estate investment trust acquired 32 properties for $55.3 million in the three-month period.

JERICHO, N.Y. — A stable net-leased portfolio and an active redevelopment pipeline added up to a solid 2018 second quarter for Getty Realty Corp.

"As expected, our revenues and adjusted funds from operations both increased significantly due to our investment activities completed in the second half of 2017 and in 2018 year to date," he added.

During the quarter, Getty acquired 32 convenience, gas and auto-related properties for $55.3 million.

"Turning to our redevelopment program, rent commenced on two projects during the quarter, bringing our total number of completed projects to five, in addition to our pipeline of 14 projects," Constant reported.

"We continue to underwrite additional transactions in the convenience, gas and auto-related sectors. Overall, the volume of opportunities available for these types of assets remains strong, and we continue to see competition from both our REIT [real estate investment trust] peers and other institutional real estate investors," he noted.

That being said, Getty is staying true to its underwriting criteria, according to Constant, and it continues to focus on "acquiring high-quality real estate and partnering with tenants who share our commitment to the growth and evolution of the convenience and gas sector."

The company is pursuing additional redevelopment projects as well and "selectively disclosing properties where we have made the determination that the property is no longer competitive as a convenience and gas location and does not have redevelopment potential," he explained.

Of the 32 properties Getty acquired in the second quarter, 30 were part of the company's transaction with GPM Investments LLC, stemming from Richmond, Va.-based GPM's acquisition of E-Z Mart Stores Inc.

The 30 sites are in Texas, Arkansas, Oklahoma and Louisiana, and approximately one-third are in the Dallas-Fort Worth metropolitan area, according to Mark Olear, chief operating officer at Getty.

"The properties we acquired have an average lot size of 28 acres and average door size of 2,800 square feet — both of which enhanced the quality and diversity of our portfolio," Olear said. "We expect to recognize initial full-year rents of approximately $3.8 million."

In addition, during the quarter, Getty acquired two properties in individual transactions for $2.7 million in the aggregate. The first property is a convenience and gas site in North Carolina, and the second is an auto parts store in the greater Chicago market.

Getty also has a full redevelopment pipeline, ending the second quarter with 14 signed leases and letters of intent. These include nine active projects and five projects on properties that are currently included in triple net leases that "would be removed when we receive various approvals required to commence construction," Olear explained.

"Our pipeline includes a wide range of retail use, such as enhanced convenience stores and gas stations, specialty parts and service, and quick-serve and fast-casual restaurants," he said.

"All of our projects are continuing to advance through the redevelopment process. We expect substantially all of these projects will be completed over the next one to three years, with several additional projects moving to rent commencement in 2018," Olear added.

To date, Getty has invested roughly $4.5 million in both completed and in-progress redevelopment projects, with $1 million occurring during the second quarter. Getty estimates that anticipated total investment through completion of the 14 projects currently in progress will be approximately $12.6 million.

"The investment in these redevelopment projects will generate incremental returns to the company in excess of what we could expect if we invested these funds in the acquisition market today," Olear said. "We remain committed to optimizing our portfolio and continued to anticipate redevelopment opportunities over the next five years, possibly involving between 5 percent and 10 percent of our current portfolio with targeted, unlevered redevelopment-program yields greater than 10 percent."

Based in Jericho, Getty Realty is a publicly traded real estate investment trust specializing in the ownership, leasing and financing of convenience store and gasoline station properties in the United States.