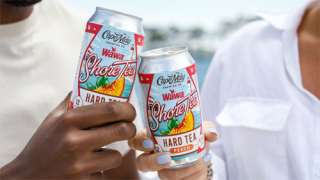 WAWA, Pa. — Wawa Inc. is toasting the grand opening of its newest beer store with the release of Shore Tea, its latest collaboration with Cape May Brewing Co.

Made with Wawa's signature Peach Iced Tea and Cape May's iconic adult libations, Shore Tea is a hard tea beverage that is "lip-smackingly refreshing with just the right amount of sweet kick," according to the convenience store retailer.

All ingredients are naturally gluten free and the beverage has 4.5 percent ABV and contains no peach juice.

"We're excited to stretch our wings and fly south to the New Jersey Shore to partner with Cape May Brewing Co. to produce our first-ever hard tea with a customer favorite: Wawa's Peach Iced Tea," said Wawa Senior Manager of Concept Development Michael McLaughlin. "Wawa's Peach Iced Tea captures the aroma and flavors of biting into a freshly picked peach at the height of ripeness, and pairs it perfectly with the warm carmelic tones of our Signature Black Iced Tea. Fragrant, juicy and sweet with just the right amount of acidity and a sweet tea finish."

An official ribbon cutting of the first cases of the limited-edition Shore Tea will take place at the grand opening of Wawa's newest beer store, located at 639 E. Lincoln Hwy in Langhorne, Pa., on July 21.

As part of the celebration, Wawa and Cape May Brewing Co. will have a "tea-shirt" giveaway for the first 100 guests while supplies last. Customers will also have the chance to meet the brewers, including McLaughlin and James Fox, director of brewing operations for Cape May Brewing Co.

"We approached the process of making this tea similar to how we make our seltzers. We kept it simple, just like if you were going to make tea at home. Fortunately, we were able to use the same ingredients that Wawa uses in their peach tea," Fox said. "After the alcohol was added, we had several benchtop trials to dial in the ratios and flavors. We are really happy with how this turned out; it's easy to forget that it's hard tea."

Limited quantities of Shore Tea are available in six-packs containing 12-ounce cans for $12.99. The brew will be sold exclusively at the following Wawa beer stores starting July 21:

Shore Tea will be available at select retailers starting July 25.

"We were excited when Wawa reached out to us with the possibility of collaborating. We're huge fans, and many of our crew members make Wawa a regular part of their routines," said Ryan Krill, CEO and co-founder of Cape May Brewing Co. "We're thrilled that we have the opportunity to continue to expand into the hard beverage space with an incredible partner to bring fans a product that they'll love."

Customers and fans can also enter a social media sweepstakes for a chance to win a VIP brewery tour of Cape May Brewing Co. Two winners, for up to four guests, will receive Wawa swag and access to Cape May Brewing Co.'s production facility, which features a newly redesigned canning line and automated tray former, expanded cellar, and more. The tour is guided by one of the brewers who will give an extensive overview into the entire brewing process, from milling and raw materials to crafting beer, centrifuging, canning and kegging, and testing finished product in the lab.

Established in 2011, Cape May Brewing Co. operates more than 74,000 square feet between administrative, production and distribution facilities in Cape May and Egg Harbor Township, N.J. It has several hundred flagship, seasonal and small-batch brews under its umbrella and distributed throughout New Jersey, eastern Pennsylvania and Delaware.

Pennsylvania-based Wawa operates roughly 965 c-stores throughout Pennsylvania, New Jersey, Delaware, Maryland, Virginia, Florida and Washington, D.C. It wants to operate approximately 1,800 locations by 2030, eventually cutting the ribbon on up to 100 c-stores a year.