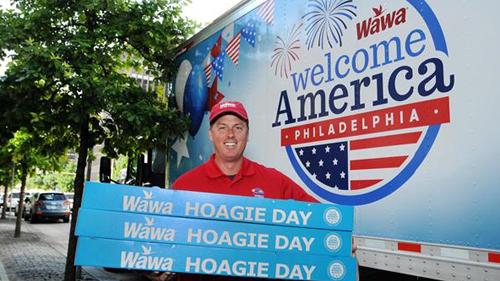 PHILADELPHIA — Wawa Inc. is shining a spotlight on everyday heroes as part of this year's Wawa Welcome America! event.

This is the ninth year the convenience retailer is serving as the title sponsor of the event, which is taking place June 28-July 4 in Philadelphia.

As part of the festivities, the 2018 Wawa Hoagie Day will include a hoagie march by military heroes and re-enactors, and a charitable Hoagies for Heroes hoagie-building competition.

A highlight of the June 28 event is the Seven-Ton Hoagie Salute, named in honor of hometown heroes, including military service men and women, firefighters, and police officers.

During the salute, the seven-ton hoagie — which will be built the morning of the celebration at the nearby National Constitution Center — will be marched in by Wawa associates and re-enactors from military moments throughout history, and served to the crowd, free of charge.

Admission to the National Constitution Center is free all day courtesy of Wawa Hoagie Day.

During the event, Wawa Chief Operations Officer Cathy Pulos will announce The Wawa Foundation’s goal to donate $800,000 for its annual USO campaign, which kicked off in Wawa stores in June and runs through July 22.

During Wawa Welcome America!, the Wawa Foundation will present its third annual Hero Award, given to a nonprofit organization serving the greater Philadelphia area that helps to advance local communities by assisting others and building stronger communities through preserving the independence, protecting the safety and mentoring and inspiring youth.

This year's finalists are:

The recipient of The Wawa Foundation Hero Award will receive a $50,000 grant and the three runners up will each receive $10,000 grants.