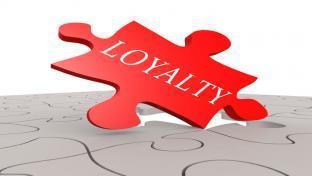 NATIONAL REPORT — Asked to rate various popular convenience store programs and services on a scale of 1 to 5 (least important to most important), loyalty programs achieved the highest rating of 3.6 in a newly released ConvenienceStore Consumer Study by AlixPartners, a global consulting firm.

The online study was conducted this past fall among 1,018 U.S. adult consumers across all regions, demographics and income levels. 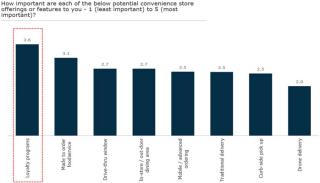 “We’re getting close to the tipping point with loyalty programs and delivery where these things will be a must for every retailer,” said AlixPartners’ Eric Dzwonczyk, co-head of restaurant, hospitality and leisure practice for the firm.

Food quality and price are the two most important factors affecting consumers’ decision to order delivery from a c-store, at 63 percent and 57 percent, respectively. However, the next two attributes also scored highly: speed of delivery (51 percent) and menu variety (49 percent).

The majority of consumers (44 percent) prefer to order directly from the store rather than a third-party service like UberEats, and a significant 37 percent said they’d rather schedule a delivery in advance vs. the more traditional order in the moment and wait for the food to show up later.

As might be expected, millennials and Gen X shoppers expect to make the largest increases in Amazon shopping for traditional c-store products over the coming year.

Thirty-six percent of millennials and 20 percent of Gen Xers said they will likely increase their shopping on Amazon, compared with only 15 percent of baby boomers and 9 percent of the Silent Generation.

“There’s no doubt anymore that Amazon is a significant competitive threat to convenience stores,” Dzwonczyk asserted. “Think of it as the Uber-fication of everything! Who’s better at that than Amazon?”

In an indication of future trends, 89 percent of electric vehicle (EV) owners said the availability of EV charging stations would be an important consideration in their choice of a c-store, with more than half of EV owners saying such stations would be “extremely important” to them.

“In the short term, this probably doesn’t mean much, but c-stores will need to consider the rate of adoption of electric vehicles. If you’re using fuel as a loss leader, you have to be mindful of the potential for lost customer counts. It might be years from now, but until we get a faster charging capability, it’s not going to be too relevant to the c-store segment,” said Dzwonczyk.

There appears to be an opportunity for c-stores to steal share from fast-casual and even fast-food outlets, especially in ready-to-eat meals, according to the AlixPartners research.

Among the challenges still facing c-stores, AlixPartners points to:

“Convenience store operators have been evolving their operating model and they have become very innovative in doing things like taking their brand in urban locations, adding drive-thrus, adopting new technology, etc.” said Dzwonczyk. “This consumer research reaffirms the need to redefine the c-store operating model.”