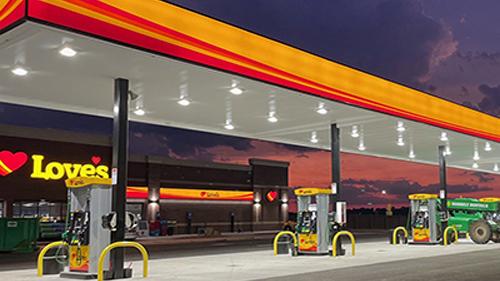 All three also feature laundry facilities, a Fresh Kitchen concept, Mobile to Go Zone and a CAT scale. The Alamo and Albany travel stops also have a dog park.

The second Neon Marketplace threw open its doors on June 24 in Warwick, R.I. The first is serving customers in Middletown, R.I.

The retailer plans to open more than 20 stores in the next year.

Sheetz cut the ribbon its second Columbus, Ohio, area convenience store two months after opening its first in the market. Beginning in 2022, the retailer plans to open approximately 50 stores in the Columbus area over the next five years.

One week prior, the retailer opened a newly rebuilt Stewart's Shops in Esperance, N.Y. The store features a covered porch with four picnic tables as well as additional seating inside. It also boasts a beer cave, an expanded grocery section and a food bar with Stewart's favorites like chili, macaroni and cheese and meatballs.

TravelCenters of America Inc. (TA) executed a franchise agreement for a travel center in Nephi, Utah. The Pump & Park Travel Center will be remodeled and open as TA Express Nephi by early 2022.

The travel center, located on I-15, will also feature a Subway restaurant, deli and an additional quick-serve restaurant.

TA Express Kingsville will be located south of Corpus Christi and north of Brownsville, and is planned to open in the second quarter of 2022.

Wawa Inc. welcomed customers at its new Wawa "Stadium Store" in Philadelphia on June 17. The retailer's latest c-store is located a little more than a mile from the South Philadelphia stadium complex and the grand opening highlighted Wawa's support for the City of Philadelphia's Bid to host FIFA World Cup 2026 matches.

"At Wawa, we have always been committed to playing a role in our hometown's signature and milestone events, and we feel the grand opening of our store closest to the Philadelphia sports complex is the perfect time to share our support for Philadelphia's Bid to host FIFA World Cup 2026 and prepare the city to welcome the world," said Chris Gheysens, president and CEO, Wawa. "Of course, beyond this exciting announcement and the events we have planned, this new store will allow us to continue to grow and serve our Philadelphia friends and neighbors. We look forward to an exciting summer ahead full of growth, new connections and fulfilling lives."

The location is the only Wawa in Philadelphia with beer sales, and the sixth in the state. Additionally, the store will feature new innovations in convenience, including mobile ordering, curbside pickup and delivery options. This store will also feature the latest in Wawa's fresh food options, including the new dinner menu offerings, such as the new burger that just launched across all 900-plus stores chainwide.

Yesway celebrated the grand opening of an Allsup's store in Bangs, Texas, on June 13.