NATIONAL REPORT — In 2014, it was GPM Investments LLC and its 120-percent store count increase, mostly driven by its acquisition of VPS Convenience Store Group's Southeast division. In 2015, it was Speedway LLC and its 86-percent growth spurt on the heels of purchasing Hess Corp.'s retail network. In 2016, it was Alimentation Couche-Tard Inc. with a 39.4-percent boost to its U.S. footprint following its takeover of The Pantry Inc., parent of the Kangaroo Express chain.

White Paper
The annual ranking, now in its sixth year, is based on store count figures provided by TDLinx, a service of Nielsen.
Download

Download the full report via the link at right.

This accomplishment was largely driven by the company's acquisition of Northern Tier Energy LP. The deal, which closed in June, added to Western Refining's footprint 170 Midwest c-stores — primarily carrying the SuperAmerica banner — and another 114 franchised locations supported by Northern Tier under the SuperAmerica trademark. (Note: Late last year, Tesoro Corp. finalized a definitive agreement to acquire Western Refining for $4.1 billion. The transaction is on pace to close in the first half of this year.)

While Western Refining's jump to Top Growth Chain was sealed when it more than doubled its size thanks to Northern Tier, the other convenience store chains on this year’s CSNews Top 20 Growth Chains ranking practically inched their way onto the list, when comparing this year’s numbers to the growth tracked by CSNews in prior years.

The annual ranking, now in its sixth year, is based on store count figures provided by TDLinx, a service of Nielsen. The period analyzed was January 2016 to January 2017. TDLinx defines a convenience store as a store that includes a broad merchandising mix, extended hours of operation and a minimum of 500 SKUs. Fueling stations with small kiosk stores do not meet the official definition and thus are not reflected in TDLinx’s store count figures.

Behind Western Refining, in the No. 2 spot, is GPM Investments with 177 net new stores added for a 26.3-percent increase. Sunoco LP's addition of 123 stores (a 4.3-percent increase) was good enough to snag third, while CST Brands Inc.'s 118-unit jump (an 11.2-percent increase) places it fourth. Rounding out the top five is Kwik Trip Inc., which added 66 stores to see a 13.6-percent lift.

This may be the new normal, according to convenience store market experts.

"There are fewer deals, fewer big companies out there," explained Dennis Ruben, executive managing director of NRC Realty & Capital Advisors LLC. "What we believe is where you are going to see more acquisitions is in the small to mid-sized companies. There is going to be increasing pressure on the guys who have 25 to 75 stores. It's going to be more difficult for them to compete with these very large players."

For our full report on this year’s Top 20 Growth Chains, look in the March issue of Convenience Store News. 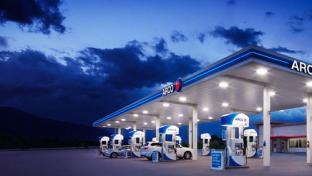