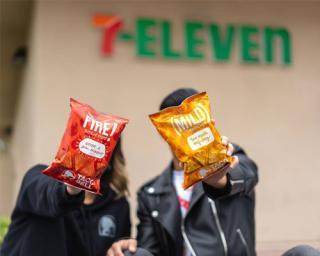 A media release from Taco Bell indicated the SKUs for the three available varieties — including Fire, Mild and Classic — would be available at other c-stores and supermarkets beginning in May, reported Shopper Marketing.

In store, the salty snacks received secondary merchandising space via floor stands. Facebook updates from Taco Bell and 7-Eleven respectively touted the SKUs and invited customers to "get them first at 7-Eleven."

"This launch of our first line of sauce packet-inspired chips gives our fans a new way to access a taste of Taco Bell," Marisa Thalberg, chief brand officer at Taco Bell, said in the media release. "Our sauce packets are one of the brand’s most unique aspects and were the natural choice for both the flavors and packaging of our tortilla chips."

Taco Bell is a restaurant brand of Yum! Brands Inc. Based in Louisville, Ky., Yum! Brands is one of the largest restaurant companies with nearly 43,000 restaurants in 140 countries and territories.

Headquartered in Irving, 7-Eleven operates, franchises and/or licenses more than 66,000 stores in 17 countries, including 11,600 in North America.